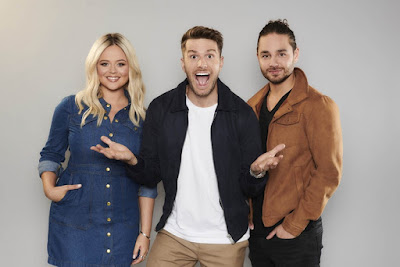 I’m A Celebrity…Extra Camp returns to ITV2 this Autumn with a brand new presenting line up.

All three hosts are funny, lively straight talking Jungle fanatics who will bring their own unique take on what’s happening in camp, with none of them afraid to speak their own mind as they dissect the day’s drama.

They’ll get all the latest behind the scenes gossip with unseen clips, exclusive interviews and the insiders guide to the dreaded Bushtucker Trials.

Viewers are invited to join the lively debates via social media and the app as well as putting their questions directly to the campmates live in the studio once they’ve left the Jungle.  The entertaining hosts will also be joined in Australia by various celebrity guests.

Joel Dommett said:
"So excited to be heading back to the Jungle this year - this time with a new bunch of amigos. I can’t wait to show Emily around and keep reminding Adam that I beat him in 2016. It’s such a huge privilege to do this show and I truly love it. I can’t wait to find out who we are watching!"

Emily Atack said:
"I'm thrilled that I get to make more amazing memories in a place that means so much to me. I've loved working with Joel on Singletown, we're like brother and sister, and Adam has got such amazing energy. The three of us are going to have the best time ever!"

Adam Thomas said:
“I can't believe that I'm heading back to the Jungle, this is something I never saw coming my way! I'm so excited to be reunited with my campmate Joel and to also work alongside Emily. We're going to have so much fun...just keep me away from those spiders!"
Posted by JD at 09:17