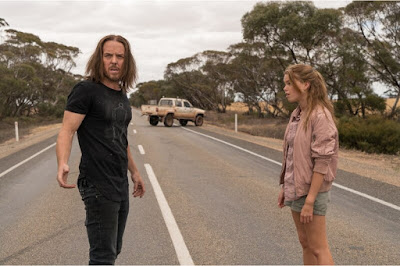 Written by and starring critically acclaimed musician, comedian, actor, writer and director Tim Minchin, Upright, follows two misfits thrown together by chance in the middle of the Australian desert, who forge the unlikeliest of bonds in their quest to get a precious piano from one side of the country to the other.

Lucky Flynn, played by Minchin, hasn’t spoken to his family in years. He’s broke, distant and damaged. He’s also a gifted pianist, whose talent for music is matched only by his talent for self-destruction. When he learns that his mother has only days left to live, Lucky sets off in a hire car to drive the 4,000km from Sydney to Perth to say goodbye, taking with him his only cherished possession in the world: a battered and scarred upright piano.

What should have been a straightforward drive across the outback soon becomes a test of Lucky’s emotional fitness when he quite literally runs into Meg, played Milly Alcock, a hilarious, tough-as-nails teenager who we soon discover has plenty of scars and secrets of her own.

All episodes of Upright (8x30) will be available to viewers from 28th November on Sky Atlantic and streaming service NOW TV in the UK and from 1st December on Foxtel in Australia.

Tim Minchin said “Making Upright was a complete joy and a massive privilege. After living overseas for more than a decade, I couldn’t have hoped to come home to a more fun and inspiring project: an original Australian outback adventure story, full of heart and laughter, made by some of most talented and dedicated creatives in the country. It’s a unique but universal story about family, resilience, music, forgiveness, and learning how to find a moment to breath out. And it’s full of silliness, action, and wonderful performances, and will make you want to go to the beach and/or ring your mum”.
Posted by JD at 16:07

Email ThisBlogThis!Share to TwitterShare to FacebookShare to Pinterest
Labels: Upright