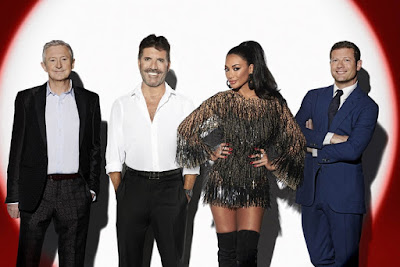 On Saturday night [19/10], viewers saw the judges go through the agonising deliberation round where they made the difficult decision to send Hayley Hasselhoff and Cole and Edwards home as well as telling Jenny Ryan they could, at that point, not give her a yes.

However, after considering the celebrities’ performances again, Simon, Nicole and Louis decided that one of those acts still deserved a coveted spot in the LIVE shows… The Chase Vixen, Jenny Ryan.

Jenny – who performed Queen classic Somebody To Love at Judges Homes – now joins the remaining celebrity acts as they go LIVE for the first time this Saturday [26/10] . The 13 acts – including Jenny and footballer-turned-film star Vinnie Jones - will now hope to win the votes of the public in the coming weeks as they bid to triumph and receive that prestigious record contract.

Mentor Nicole said: “Jenny was just brilliant at her audition in LA. That voice of hers is one of a kind, and she's an amazing person to get to know. So it was such a tough decision to make. After a lot of discussion we all agreed we had to put her through. The Overs are gonna smash it this year!"

Jenny said: “I’ve loved every moment of The X Factor and I’m delighted to be able to get the opportunity to perform live. The response from the public has been amazing – what an incredible experience. I’m so pleased it’s continuing!”