The ITV2 Blood Squad is back 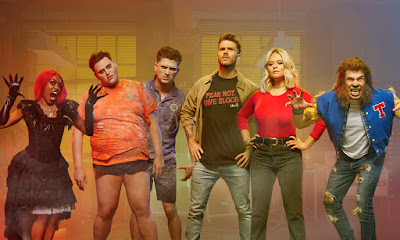 The spookiest time of year is upon us and as the nation prepares to scare each other senseless for Halloween, the ITV2 Blood Squad has assembled to once again eliminate the fears that surround blood donation.

Last year, ITV2 and NHS Blood and Transplant (NHSBT) came together in a bid to dispel young peoples’ reservations about giving blood. During the campaign an enormous 31,000 people registered as blood donors, a 19% increase in registrations compared to the year prior.

As a result of the enormous rise in donor registrations, the ITV2 Blood Squad is back for a second year running, to encourage more young donors to register and book an appointment at one of the 23 donation centres across England.

This year’s squad is led by I’m A Celebrity…Extra Camp hosts Emily Atack and Joel Dommett and comprises an array of other fangtastic famous faces who are urging young people to register and donate.

The fresh, Halloween-themed promos produced and created by award winning ad agency, ITV Creative, see the squad debut their scariest looks yet leaving some of them completely unrecognisable. The promos will run on air, in cinema, and across digital and social media from 17th October in the lead up to Halloween.