The Wall Hosted by Danny Dyer, the ultimate combination of strategy, knowledge and luck 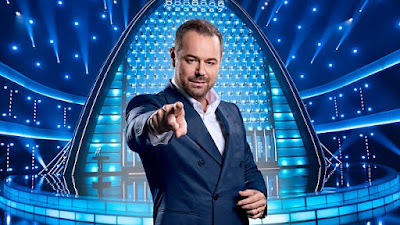 Hosted by EastEnders star Danny Dyer, The Wall (6x45') is the ultimate combination of strategy, knowledge and luck and will see the questions voiced by TV legend, Angela Rippon.

Wildly unpredictable with heart stopping jeopardy, The Wall gives and The Wall takes away. Expect colossal wins and heart-breaking losses, this new game show really can change people’s lives in an instant.

In this game, pairs need the right answers, the right bounces and cast-iron trust in each other to win a life-changing cash prize.

The Wall, an original format created by SpringHill Entertainment and Andrew Glassman’s Glassman Media in collaboration with Universal Television Alternative Studio, was first shown in America on NBC in 2016. The most travelled format of 2017 and 2018, The Wall is an international hit and has sold to 24 territories around the globe.

The Wall has been commissioned by Charlotte Moore, Director BBC Content and Kate Phillips, Controller, Entertainment. The Commissioning Editor for the BBC is Rachel Ashdown. The Executive Producer for Remarkable is Richard Hague. The Series Producer is Stephen Lovelock.


The format
In each show one pair take on The Wall in three rounds that are the ultimate combination of strategy, knowledge and luck.

Freefall (Round one)
A pair of contestants start out playing together for fast cash in freefall. A multiple-choice question with two possible answers is asked as three balls fly down The Wall. The balls fall randomly towards slots of varying cash amounts. The players have until one ball has reached the money to lock in their answer. If they’re correct, the balls turn green and money is added to their prize pot. However, answer a question incorrectly and the ball turns red, deducting the amounts of the slots they land in. There are five questions in freefall and the only rule is that players must finish the round with cash to progress.

Round two
The money slots have larger cash amount added. The pair of contestants separate. One goes into isolation, the other stays with the host. The player gets two free green balls to try and accumulate cash. But whichever slots they drop from at the end of the round, two red balls will also have to drop the same slots. The players then face three questions. The player in isolation, under intense pressure, will answer the questions whilst their partner takes risks on The Wall.

For each question, the player in front of The Wall is shown three possible answers, before deciding which slots to place the balls, based on whether they think their partner is going to answer the question correctly or not. The more confident they are, they should place them to the right - closer to the higher amounts. The less confident they are, they place them to the left - nearer the smaller amounts. If the isolation player is correct the ball turns green, if they’re wrong, the ball turns red - but the isolation player never knows if they’ve answered correctly. For questions two and three, The Wall player has the chance to double up and then triple up - players make this decision after seeing the possible answers to the question and must decide based on their confidence in the isolation player. The balls are all played on the same number. At the end of the round, The Wall player must drop the two red balls from the same number as the free green balls at the top of the round. These will subtract the amount of whatever they land in.

Round three
The money slots have larger cash amount added. Round two works in a similar way to the previous round but this time players get three free green balls to drop, in order to try and maximise their cash winnings. But whichever slots they drop the balls from they will have to drop three red balls from the same slots at the end of the round. The players face three more questions, this time with four possible answers. As before, the player in isolation will answer the questions while their partner takes risks on The Wall. Again, for questions two and three, The Wall player has the chance to double up and then triple up - players make this decision after seeing the possible answers to the question and must decide based on their confidence in the isolation player.

The contract
In the final round before the final three red balls are dropped, the isolation player is sent the contract. If the isolation player signs it, the pair take home the sum that was banked in the freefall round, plus a cash amount for every correct answer they gave over the course of the game - this is the guarantee. However, they’re in isolation so they don’t know how well (or badly) they’ve played and what the final value of the guarantee is. If the isolation player tears it up, they take the risk that their partner has been more successful and they will take home whatever is left on The Wall. If there’s any money left in play on the wall, the player must drop the three red balls from the same number as the free green balls at the top of the round. These will subtract the amount of whatever they land in.

Email ThisBlogThis!Share to TwitterShare to FacebookShare to Pinterest
Labels: The Wall