A new trailer for Sky original The New Pope 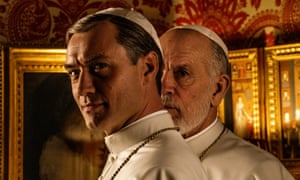 A new trailer for the upcoming season of The New Pope, the HBO-SKY-CANAL+ series, has been unveiled today. The New Pope is produced by Lorenzo Mieli and Mario Gianani for Fremantle’s Italy-based producers Wildside, and co-produced by Haut et Court TV and The Mediapro Studio.

All nine episodes of The New Pope are directed by Academy Award®-winning filmmaker Paolo Sorrentino. The limited series is written by Sorrentino with Umberto Contarello and Stefano Bises, and marks Sorrentino’s second limited series set in the world of the modern papacy.

Fremantle is the global distributor for The New Pope.

The New Pope will debut in January 2020 on Sky Atlantic and NOW TV.

Email ThisBlogThis!Share to TwitterShare to FacebookShare to Pinterest
Labels: The New Pope