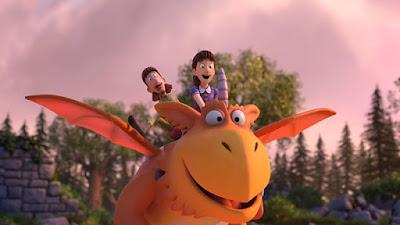 Magic Light Pictures, the multi Oscar-nominated and Bafta Award-winning production company, has announced that an animated adaptation of Julia Donaldson and Axel Scheffler’s children’s book Zog And The Flying Doctors, the companion title to Zog, is set to premiere on BBC One for Christmas 2020.
The animated half hour will be produced by Michael Rose and Martin Pope of Magic Light, and directed by Sean Mullen. Animation services will be provided by Giant Animation in Dublin. The special has been acquired by Charlotte Moore, BBC Director of Content and Tommy Bulfin, Commissioning Editor, BBC Drama.

The first Zog film was a roaring success from Christmas 2018 and has recently been nominated for an International Kids Emmy and won a number of other awards.

In the new film Zog, Pearl and Gadabout are now a flying doctor trio, caring for creatures including a mermaid, a unicorn and a sneezy lion. However when bad weather forces them to land at the palace, Pearl is locked up by her uncle, the king. Zog and Gadabout try to set her free. However when their attempts fail, Pearl has to come up with the best way of all to regain her freedom.

Charlotte Moore, Director of Content, BBC, says: "BBC One will be home to another favourite Donaldson and Scheffler adaptation for Christmas 2020, once again continuing our collaboration with the award winning Magic Light Pictures on the fabulously original sequel to the best-selling Zog - Zog And The Flying Doctors."