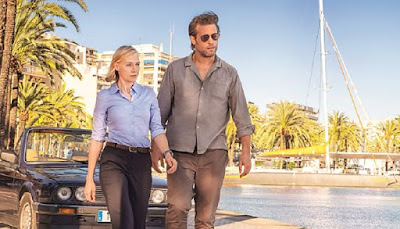 A second series of the Balearic cop drama has been commissioned for BBC One Daytime and BBC iPlayer, as series one is confirmed for broadcast on Monday 25 November.

They may have different approaches to policing, but Detectives Blake and Winter (Elen Rhys and Julian Looman) have proved a winning combination for the BBC, with a second series of the feel-good crime drama series set on the UK’s favourite holiday island already commissioned. Filming begins today.

Dan McGolpin, BBC Controller Programming and iPlayer, has commissioned the second series penned by Dan Sefton (The Good Karma Hospital, Trust Me) and with the ten episodes from series two appearing on screens in 2020.

All ten episodes of series one will be available on BBC iPlayer after the first episode airs on BBC One at 2.15pm on Monday 25 November.

Dan McGolpin says: "With the nights drawing in, the time is right to transport yourself to sunnier climes by watching The Mallorca Files on BBC One and on BBC iPlayer from later this month. People are going to love spending time with Miranda and Max in this exciting and stylish first series and I’m delighted to announce that our crime-fighting duo will return for more capers in 2020.”