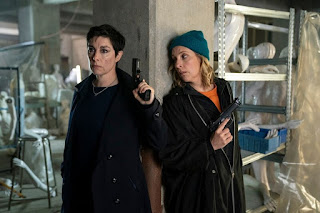 Sky has today released the first look image for upcoming six-part comedy starring everyone's favourite double act, Sue Perkins and Mel Giedroyc in the duo’s first scripted comedy series. Written and created by Joe Parham and Joe Markham, the show is set to premiere on Sky One and NOW TV in spring 2020.

The six-part Sky original series produced by Tiger Aspect follows two best friends trying to make their way in the world with only each other to rely on. They also just happen to kill people for a living.

Morwenna Gordon, Commissioning Editor, Sky Comedy, said: “We are thrilled to have Mel and Sue back on our screens, in their first ever scripted comedy series. We have a brilliant cast, featuring many well-known faces, in a number of unexpected and potentially life-threatening circumstances that Fran and Jamie find themselves in along the way. Joe Parham and Joe Markham have created a world that’s ruthless, funny and heart-warming all at the same time. The series joins a host of fantastic Sky original comedies we have coming to Sky One next year which we can’t wait for our audience to enjoy.”

Joe Parham and Joe Markham said: “We can’t believe that something which has been knocking around inside our heads for so long has been brought to life by two of the funniest people in the country, along with a load of our other comedy heroes.”

Arnold Widdowson, Producer, Tiger Aspect, said: “Hitmen is a real treat for Mel and Sue fans – a surprising version of the two that for all the thrill of the action still retains their hilarious and mischievous dynamic. It’s been an absolute privilege and joy to work with such an iconic double act, and with our brilliant writers Joe Parham and Joe Markham, on a show that allows them to flex new muscles they never knew they had. Mainly in their trigger fingers.”

Email ThisBlogThis!Share to TwitterShare to FacebookShare to Pinterest
Labels: Hitmen