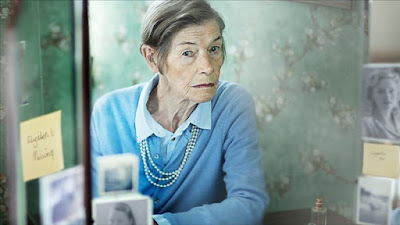 Two-time Academy Award winner Glenda Jackson makes a triumphant return to the screen after 27 years, in this poignant and compelling mystery based on the bestselling novel by Emma Healey.
When her best friend Elizabeth goes missing, Maud is convinced something terrible has happened. But her search to find Elizabeth unearths an altogether darker unsolved mystery: her sister’s disappearance, long buried in the recesses of her memory.

Can Maud discover the fate of both missing women before her dementia erases the clues and the answers are lost to her forever? 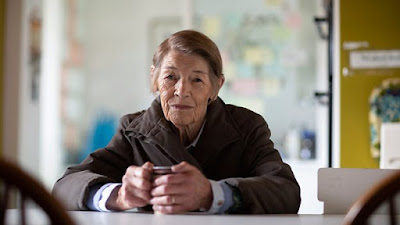 What initially interested you in the project, Elizabeth Is Missing?

Elizabeth Is Missing is about a subject that is of enormous importance. We, the human race, live longer and longer and there are always new illnesses coming to the fore. This story deals with a woman and her family who are going through the realisation of what Alzheimer’s really is and how terrible it is. It was interesting to explore a life lost and how society has tried to maintain those people whose health is also severely damaged.

It’s a great big black hole that’s opening up within western democracy at the moment. The overarching interest for me is this problem of how we deal with the fact that we are living longer. It’s a blessing and it can also be a curse. We don’t know how we are going to care for people who are no longer capable of caring for themselves. It’s going to cost money, so where are we going to get the money from?

How did it feel to be back filming after so long off screen?

It’s been decades since I last stood in front of a camera to make a film and the most remarkable thing for me has been the technological change. In my day, the cameras were enormous and they had to be physically moved around. You’d be ready to shoot but you’d wait for three hours. The camera seems to work off a battery, we had generators in my day. The only way people knew how the work had gone that day was when they’d see the rushes. Now the equipment is just astonishing. People are able to see what’s happening on the set by looking at a screen. I avoided it like the plague but for those people whose business it is to know, it must be invaluable.

Did you undertake any research in that area that has been key to playing the role of Maud?

When I first read the book and then the script, it sparked memories of when I was still a member of parliament and had to visit various day centres and old people’s homes. I wouldn’t say I am an expert in either Alzheimer’s or dementia but I have seen people and families who suffer from it.

I was also privileged to meet a doctor who specialises in dementia and she said the book was very accurate. She remarked, quite profoundly I thought, that it was presented as being so unsentimental. That was very useful to me.

Have there been any challenges in playing Maud?

It’s actually been a challenge to find Maud. The extremes of her experience are easy, but it’s her day-to-day and middle road existence that’s really difficult to pin down. That is of course what makes her so intriguing to play.

What does her friendship with Elizabeth mean to her?

Elizabeth, of the title, is Maud’s best friend. She is probably a decade younger than Maud but they’re both elderly. The Elizabeth story runs concurrently with an incident in Maud’s teenage years when her sister Sukey disappeared. Within the context of the script, Maud is going through the development of Alzheimer’s. She’s sometimes in the here and now, more often in the past and then sometimes very bleakly in the future. What she is, is a person.

Their friendship is another central part and informs the whole film. Now we’re all living longer, undoubtably there will be the terrible pitfall of loneliness. What essentially motivates Maud to continue along a track which she intensely believes in, despite her illness, is her friendship with Elizabeth. It’s not only because of her own sense of being alone but also because she cares for her friend. It’s been proven that loneliness can have a really detrimental effect on mental health. That in itself is something to think about very seriously.

What is Maud’s relationship like with her daughter Helen and her granddaughter Katy?

Maud’s husband died many years ago but she still has family. Her son, who is clearly her favourite child, is in Germany with his family so her closest people are Helen and Katy. Her relationship with Helen veers from being critically ignorant of her to being dependent on her. Maud isn’t ignorant of her being there but she ignores what she thinks and says. At the same time she’s very dependent on her, emotionally and physically. She has these flares of rage but it will be expressed against anybody that’s in the room. In a curious kind of way, it’s not personal. The illness takes away understanding on every kind of human being level. She can be very brutal to her granddaughter but it’s because she doesn’t recognise her as her granddaughter. I’ve seen that, I’ve seen people not recognising their family. However many times they’ve seen it, for the family member it is really desperately upsetting.

Email ThisBlogThis!Share to TwitterShare to FacebookShare to Pinterest
Labels: Elizabeth is Missing