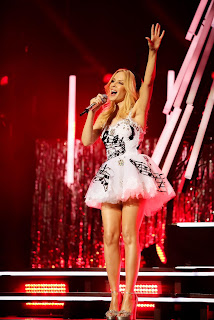 Fresh from her Glastonbury legends slot triumph and a raft of sold our tour dates throughout the world, the quintessential pop princess Kylie Minogue will cap off a Golden 2019 as the subject of a very special secret night this December on Channel 4.

A must see spectacular, Kylie’s Secret Night, produced by BBC Studios, will allow viewers to celebrate with Kylie like never before. The 90-minute programme, filmed in front of an audience of passionate – and unsuspecting – fans will see a specially invited audience arrive for what they believe is a Kylie themed fan extravaganza hosted by Alan Carr. Little do they know they’re going to be spending a secret evening with the lady herself…

Over the course of the show Kylie will treat her guests to the ultimate thank you through heartfelt and hilarious conversation with Alan, memorable performances, surprise money can’t buy gifts, hidden camera VTs and laugh out loud stunts.

Throughout the episode, we’ll hear from a cross section of Kylie fans who will regale her and the audience with moving, uplifting and heart-warming tales of how she’s touched their lives including inspirational Barnsley music teacher and superfan Simon who runs Kylie music classes for adults with learning difficulties. He got the shock of his life recently when a surprise guest made at an appearance at one of their rehearsals.

Some very special fans will be joining Kylie on the night including a select group of people who’ve been named in homage to her and some very shocked people will also be taking a cab share trip like no other.

Encouraged to do so by Alan and the audience, Kylie will also reveal which of her tracks is her personal favourite and there may well be some surprises of her very own in store too.

And if that’s not enough of a treat then immediately after the show ends, Channel 4 will be showing the UK television premiere of Kylie’s smash hit Golden tour. Packed full of incredible hits, spectacular visuals and fabulous choreography, we’ll see just why she’s the original pop princess.

Kylie Minogue said, “This was such an incredible show. It made me laugh, it made me cry. It was like time stood still and I was able to hear some amazing fan stories, reminisce and really take stock of the journey we’ve been on together. All in all, a wonderful celebration, and a reminder of what a privilege it is to be able to connect with people over time and borders and to inspire me to do it all again!”
Posted by JD at 14:08