Mortimer and Whitehouse cast off for third series 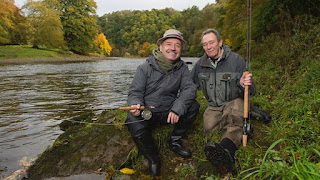 The critically acclaimed, Mortimer And Whitehouse: Gone Fishing is to return with six episodes for a third BBC Two series.

Over the summer, Gone Fishing once again charmed the nation with consolidated audiences of 2.2 million tuning in to see lifelong friends and comedic royalty, Bob Mortimer and Paul Whitehouse return to the riverbanks.

The series received universally positive reviews and audiences that increased throughout the series run.

Patrick Holland, Controller of BBC Two says: "When Paul and Bob first came to see us three years ago with the idea of making a series about fishing, we couldn't have imagined their daft idea would become one of the most loved shows on TV. Brimming with friendship, care, beauty, escape and a bit of fishing, it's a show we are so proud of on BBC Two."