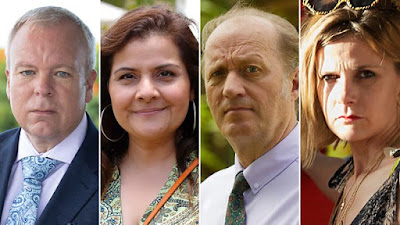 Renowned for its clever murder mysteries against an idyllic Caribbean backdrop, Death In Paradise remains one of television’s highest-rated dramas since launching in 2011 and the tenth series will go into production in 2020.

The award-winning series will also see EastEnders star, Nina Wadia join for not one, but several episodes in a guest role.

Nina Wadia says: “It’s been wonderful playing Anna, who in having to start her life over, rediscovers herself whilst unexpectedly finding romance on the island! I laughed my way through it all; how could I not with that fantastic cast?”

Steve Pemberton says: “Death In Paradise is such a well-loved and established show and it was a pleasure to be part of series nine. The cast and crew were brilliant and with the bonus of filming in Guadeloupe with my old pal Ralf, it was an opportunity that I couldn’t miss.”

Alexander Vlahos says: “I’m thrilled to have been invited to be part of this wonderful series. I had an absolutely joyous time on the island, working with Ardal and the rest of the team. I can’t wait to see the episode!”

Filmed on the picturesque French-Caribbean island of Guadeloupe, this series will feature new intriguing puzzles for the team to solve including a mysterious masked attacker who strikes twice at a family rum distillery and a survival camp trip gone wrong!

Email ThisBlogThis!Share to TwitterShare to FacebookShare to Pinterest
Labels: Death In Paradise