The Mallorca Files - Crime’s about to get a kick in the Balearics! 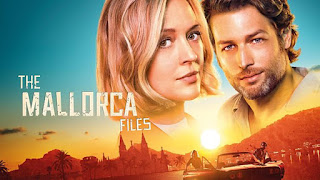 Set amongst the vibrant international community of the eponymous Spanish island, The Mallorca Files centres around Detective Miranda Blake (Elen Rhys) - an introvert who is used to living by the rules - and her German counterpart Max Winter (Julian Looman), whose approach to policing is based on gut-instinct, with little interest in process.

Their dynamic - sometimes in sync, but mostly not - sets the rich humour and playful tone of the series, which marks a welcome return to the police caper. The Mallorca Files plays out against the backdrop of sun-drenched locations and glamourous lifestyle of the Balearic island few Brits get to see.

In the line up to bring The Mallorca Files to life are a high-calibre production crew of exceptional pedigree. They include Bryn Higgins (Endeavour, Black Mirror, Electricity) who leads a slate of directors including Charlie Palmer (Poldark, Doctor Who, Silent Witness) Rob Evans (Mr Selfridge, Granchester, Our Girl,) and Gordon Anderson (Shetland, Lovesick, Shameless).

The Mallorca Files is a Cosmopolitan Pictures/Clerkenwell Films co-production for the BBC. Ben Donald and Murray Ferguson are executive producers, together with Dan Sefton who leads a team of writers, which included Rachael New, Sarah-Lou Hawkins, Dan Muirden and Alex McBride.

The show will play out across the week Monday to Friday for two weeks, beginning Monday 25 November on BBC One daytime.

All 10x45' episodes will drop on BBC iPlayer after the first episode airs.