A Christmas Carol - Interview with Andy Serkis (Ghost of Christmas Past) 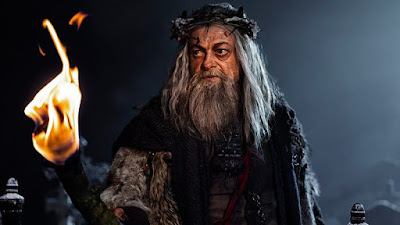 Tell us about this version of A Christmas Carol…

"Charles Dickens' A Christmas Carol." When I think of those words I think of a fireside, holly, the ghosts, and a kind of warm, fuzzy, journey. It gets a little dark and scary but it’s a happy ending. That is the expectation most people have of that story. Our version is a darker telling of this tale and is brilliantly written by Steven Knight. It really examines the character of Scrooge in a way that I don’t think has ever been seen before.

It feels very contemporary, the emotions, the human nature, the selfishness, the greed and the way Scrooge operates. Its couched in a Victorian environment and so you have a real interesting tension between the way it looks and the way it feels.

The Spirit of Christmas Past, who I play, is very different. He’s normally portrayed as this affable character who takes Scrooge back to an early part of his life where things were happy. But in this version, he’s much more confrontational, he is going in there to examine Scrooge’s soul, he’s got a red-hot poker that he’s trying to press against Scrooges conscience to get him to stop denying who he is.

Do you remember the first time you came across A Christmas Carol?

The very first time I came across A Christmas Carol was it being read to me when I was quite young, maybe about nine or ten.  The character of Jacob Marley stood out to me, the man in chains, carrying all of his sins and searching for redemption, I remember being haunted by that image.

Steven Knight is such an extraordinary writer, the worlds that he creates are so thorough. He has a real love and passion for Charles Dickens, and Dickens was a writer that also really delved into social inequality and different class structures. That combination and the way that Steven has extrapolated his story from Dickens’ book is exceptional. That’s what drew such an interesting cast, no one wants to make yet another version of A Christmas Carol, because there have been so many great versions, but this is so original. Steven really wanted to examine humanity in its rawest form and to take the expectation of the book, subvert it, and make it about the world that we live in, is really an extraordinary feat.

There are so many ways that you can visually interpret this story. The production design, the costume design, the makeup and hair, and so on, everything was geared towards it being visually interesting and spectacular, and of course, period, but it doesn’t draw attention to itself in a way that takes you out of the story. You take it for granted that these things are real, and that’s a real skill to pull off. It all provided a backdrop that was a great canvas for examining Scrooge’s psychological and emotional journey.

Do you have any standout memories from filming?

The night shoots that were filmed very early in the morning! My first scenes playing this character were all night shoots. So, at four/five o’clock in the morning when your mind is melting, and you’re trying to remember dialogue and still trying to find the character, it’s quite brutal! That was a real challenge but having Stephen Graham there to act with was just brilliant, and we helped each other, well I think he helped me more than I helped him!

And to work with Guy who was literally on set all the time, and to watch how he was operating, was great.

What do you hope audiences take from this version of A Christmas Carol?

I really truly think that audiences won’t have seen anything quite like this. It is not particularly for young children, tonally it’s more suited to a slightly older audience, I would say 12 years old and above, and with that comes the freedom of expression to take it into a much more honest and visceral analysis of what it is to be someone in this world who has enjoyed profit at the expense of other people’s lives.

There’s a very good reason why this story is repeatedly told. I mean, it’s obviously a fantastic piece of literature, but it also speaks to every new generation in a different way. There are universal themes in this story, Christmas is a very special and significant time where we tend to reflect on our standing in the world. There is an expectation of this story to be a particular way and the universal themes are still there, they still carry through from Dickens’ original writing, but this is such a fresh palette that Steven Knight is working with that it is definitely something new. It makes a book that was written over 150 years ago relevant in a very deft and intelligent way. You still have the same characters, but, for instance Bob Cratchit, who is the perennial slave of Scrooge, actually has a voice in this version, he almost stands up for himself to Scrooge. So, where we think we know the story and we think we know the relationship of the characters, it’s just gently subverted.