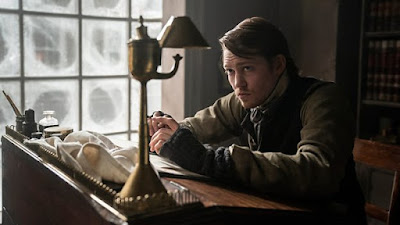 Do you remember the first time you came across A Christmas Carol?

Now you are more familiar with it, what is about the classic story that you think is so loved and popular?

We keep coming back to it for several reasons. Thematically, it seems to tap into the universal theme of what it means to be a human being, it’s about our own humanity. The themes of redemption, hope, family and kindness, are ones we always return to in stories, particularly around Christmas time.

Tell us about your Bob Cratchit...

On the one hand he’s the man people are probably familiar with, the essence of him is a good, loyal, family man who toils away in Scrooge’s workplace and is paid next to nothing in order to provide for his family. He has a child who is sick - that’s Tim - and he has a daughter Belinda and his wife, Mary, that’s his family. But at the same time, there is a steeliness to him and a degree of pluckiness that is played around with in a way that hasn’t been seen before. His way of fighting back as much as he can is by biting back at Scrooge or being a little bit sarcastic or snide, never so much that he oversteps the boundary because he can’t afford to, but he isn’t completely subservient and weak either.

It’s exciting to get to play a character that is so well-known and from a source material that is so important to so many people. I didn’t really look at other interpretations, it probably would have just made me feel intimidated as much as anything else, and I wanted to come at it fresh. Steve’s story is very much a world of its own and that goes with the characters too.

He’s such a talented writer. It’s one of the best things I’ve read. He obviously writes Peaky Blinders, and that doesn’t feel a million miles away in tone from this world. He’s explored a story that has been done so many times but has found a completely fresh approach, and he’s explored themes and elements that haven’t been looked at before and are really powerful.

It’s amazing working on anything and seeing what the heads of departments create with production design and with makeup and with costume, but particularly on period pieces because it is a new world you’re stepping into. It does so much for you. Streets were closed, they were covered in fake snow and there were horses and carts, and hundreds of children, men and women as supporting artists. And when you’re on those sets, in your costume and makeup, it helps you sink into that world so much more.

How do you feel about being involved in the show?

It’s been amazing to be a part of the show. It’s rare to read things like this and to work with a writer like Steve Knight, who is at the top of his game.

Apart from the two children who play my children, I was the youngest on set. So, to be surrounded by people like Guy Pearce, who I remember watching in Memento when I was 12 years old, Andy Serkis and Stephen Graham, was exciting. I was lucky to be a part of a story that means so much to people and is so iconic.