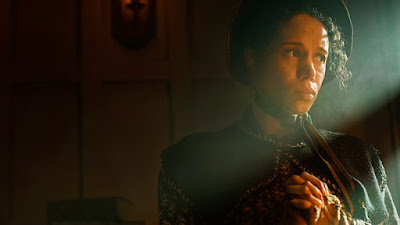 Can you tell us about Mary Cratchit?

In the books you don’t learn much about her other than she is the wife of Bob and the mother of Tim, but, in this version of the story, Steven has imagined her side of events and how she deals with the strained circumstances that the family is under. First and foremost, she’s a good mum, she’s so resilient, she’s sensitive and she’s tough and she’ll do anything for her family. She has to keep her family safe and has to make some very tough decisions on that front.

What else do you think is unique about this version of the story?

What’s great is that Steven has written two female characters who have agency, Lottie and Mary, and done so in a really clever way. They are not passive and very much drive their own stories.

Can you tell us a bit more about Steven Knight’s scripts and why you wanted to be part of this drama?

It’s first and foremost always about the scripts for me and Steven is just such an incredible writer. I really loved what he’d done with this version. For a story which has become so well-worn, he made me look at it in a new light. Dickens is known for shining a light on society and the effects of poverty, but A Christmas Carol has become, in its re-telling over so many years, a ‘cosy‘ story about redemption. This version refocuses on how hard life was then and has parallels with what is happening today with the working poor. That brings a harder edge to it, which was in Dickens’ writing anyway, but we have become immune to it. If you are going to tell such a well-known story again there must be a reason, a freshness and a different perspective to it.

I didn’t know who had been cast when I auditioned but when I found out I was very excited to be a part of it. There are some brilliant scenes between me and Guy, who plays Scrooge.

The creative teams have done an incredible job. It’s a darker, colder world but the attention to details is amazing.

One example is with my costume. There’s a scene where I’m drawing a book for Tim for Christmas and the costume designer had the idea from that, as Mary is creative, she would embroider, which fitted with my research that a woman of her status and her position would take in seamstress work. There is all this beautiful embroidery work on my costumes, really subtle details which then carry through to the children’s costumes too. Then the design team also incorporated that into their home. So all those details are just beautiful and add texture to the story.

Do you have any stand-out memories from the filming?

When we were filming some snowy scenes in a church in Hampstead, some of the local famous people just popped by to have a look! When you see it on screen you can’t believe that during the filming of those scenes the sun was boiling! There were these incredibly loud wind-turbines that made it feel like we were in the middle of an air-field, to give the blustery nature of it. That really helped us to get in the mood because it was like stepping into winter!