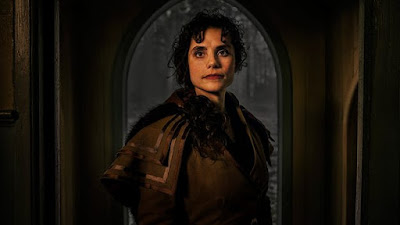 Tell us about your character...

What sets her aside from the other ghosts is that she was a human, she’s not an entity or an unknown spirit. Her spirit is that of a human, his sister. What I think is exciting is how Steven’s taken a character that I personally think is a bit dull in the book and created a connection with Scrooge. It’s made the journey that the two of them go on much more interesting because it personalises it. We see why he is the man that he is today, the bad choices in his life, and she feels the sadness about it that he does. So, it’s a very smart device that Steve’s used to freshen it up. In past versions this ghost has been quite benevolent, and she’s benevolent too, but she can also reach him in a way that nobody else can because of the love that they shared, and still share, for each other.

Can you tell us about working with Steven Knight again and why you wanted to be part of this drama?

We’ve worked together on Peaky Blinders, so I’ve gotten to know him well over the years and just knowing who he is meant I knew he would do something exciting with this story. I’ve also never done anything particularly for Christmas or Dickensian, and I loved the idea of doing that. I loved that in it we discover what’s underneath Scrooge and that, like the novel, it brings the macabre and the spooky to Christmas. I really enjoyed working with him and he really enjoys talking to actors and changing and moulding the script to whoever plays the part. Plus, I really wanted to work with Nick Murphy (Director) who I’ve come close to working with on projects before and we’ve never quite managed it, so that was amazing, he’s a fantastic director.

Do you remember the first time you came across the story of A Christmas Carol?

I remember that as a little girl I wanted to watch it because I loved the period it was set in, which really harked back to the ideal of Christmas, with the snow and the crackling fires, but then I always found it too scary to watch the whole way through. So, I’d always just watch the first bit and then run out the room and come back in when it was all nice. I hated scary things as a child, so my memory is patchy of it, of watching little snippets to quench the desire for the comfy cosy Christmas and then hiding from the spooky bits!

There was a lot of fake snow and a lot of fires and we were in these incredible costumes sweating by these fires in the Summer, which was quite interesting! The tone is dark, and Dickensian but warm, like with the crackling fires, as well. It’s got more grit and reality to it than other adaptations, it’s got that Steve Knight feel and some bits are pretty terrifying!

Do you have any standout memories from filming?

One of the first scenes that I filmed was in a graveyard in North London and they’d transformed it into a winter wonderland, and everybody was stood around in their costumes and it just looked so beautiful and incredible. Everyone around was drawn to it, I think even Ricky Gervais came and had a look!

Why do you think the story of A Christmas Carol has resonated for so many years?

It’s a story of redemption, a story of a person who the world has given up on and, through moments of fear but also love, his heart opens to see what life could be if he stopped holding on to the pain of the past.