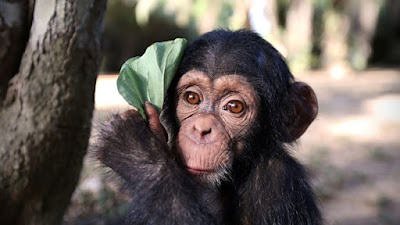 Baby Chimp Rescue will follow life in a home for orphaned baby chimpanzees run by wildlife vet Jimmy Desmond and his wife Jenny.

The Desmonds started with just two rescued baby chimps, saved from the illegal pet trade, but now their home is bursting at the seams with 21 orphans to look after.

The chimp babies run riot around the compound they share with a pack of adopted dogs, as they learn to play with their new adopted siblings. Baby chimps form very close bonds with their mothers during their early years, so Jimmy, Jenny and a small army of care-givers work around the clock to help the babies recover from their trauma.

Chimpanzees share around 96 percent of human DNA (1). Like humans, they have complex emotions, a high level of intelligence, unique finger prints and even a sense of humour. Sadly, chimpanzee numbers have plummeted in West Africa in the last 25 years and they are now classified as critically endangered species (2). Wild chimpanzee mothers are killed for bush meat and their babies are sold as high-value pets. While it is illegal to keep chimpanzees as pets in Liberia, many are unaware of the law.

Sadly, many of the rescued chimp babies lost their mothers before they were able to learn key skills, and will not be able to return to the wild. Professor Ben Garrod, evolutionary biologist and conservationist, will help Jimmy and Jenny teach the chimps vital life lessons such as climbing, foraging for food and recognising danger. Ben will visit the Desmonds and their ever-growing chimp family over 12 months. Together, the team hope that the chimps will grow up to live independent lives within their new home.

Despite battling financial worries and an overflowing home, the Desmonds are determined to achieve their dream of moving the chimps to a more natural habit: a 100-acre forest surrounded by mangroves.

Jo Shinner, Executive Producer for BBC Studios Natural History Unit, says: "These orphan chimps are all suffering PTSD. The care and love lavished on them by the Desmonds is an extraordinary thing. This story of our times has captivating and irresistible characters, both chimp and human, set against a wider picture of wildlife crisis."

Professor Ben Garrod says: "We are in a global crisis of climate change and biodiversity loss, and with everything seeming like an ecological uphill struggle, the story of the Desmonds battling to save our closest living relatives is a much needed good-news story. If we can save Max, Bui and their relatives, then it gives us hope for the future of countless other species, including ourselves."