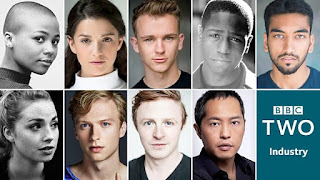 Casting has been announced for Industry, the brand new drama from Bad Wolf (His Dark Materials, A Discovery of Witches) coming soon to BBC Two and HBO.
Industry is the debut drama from writers Konrad Kay and Mickey Down (pictured below), and is an exhilarating dive into the world of international finance, as seen through the eyes of ambitious twenty-somethings struggling to secure their futures.

The series follows a group of young graduates competing for a limited set of permanent positions at a top investment bank in London - but the boundaries between colleague, friend, lover, and enemy soon blur as they immerse themselves in a company culture defined as much by sex, drugs, and ego as it is by deals and dividends. As members of the group rise and fall, they must decide whether life is about more than the bottom line.