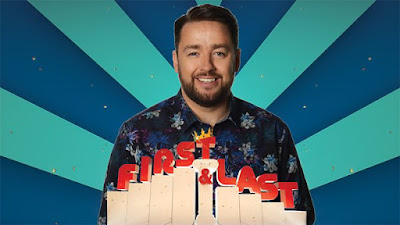 Hosted by comedian Jason Manford, First And Last (6x45') is a brand new game show that will put contestants through a succession of ingenious rounds, all of which have one golden rule - players mustn’t come first or last in any game. If they do, they will be eliminated.

Eleven contestants start each show and compete across a range of five downright daft, stupidly funny, play-along-at-home games that will see one of them leave with a cash prize of up to £10,000. The first and last players are eliminated from each round. To triumph, they’ll need to judge every round to perfection and hold their nerve in the nail-biting endgame - contested by the remaining three players.

The show opens to reveal eleven contestants either hidden inside boxes or holding buckets down over their heads. All the contestants have to do is choose their moment to jump out of their box or let go of their bucket. The first and last contestants to make their appearance will be eliminated.

The remaining nine contestants are given a category and asked to secretly write something within that category. The goal is to offer an answer which gives neither the most nor least successful result. The game will vary each time. Categories will include various search engines.

Prior to round three, the seven remaining contestants always play Weigh To Go.

This isn’t a game in itself, but a way to decide the order in which the contestants will play the next game. It’s our version of drawing straws! The contestants will all be asked to bring a vegetable, such as a potato, into the studio. Amidst OTT dramatic lighting, they will then be asked to reveal their potato and place it on the podium.

The potatoes are weighed, and the contestant who brought in the potato of the middling weight will pick first in the next game.

In round three our seven contestants will always pick from one of seven things. They might be represented by props, pictures or people in the studio.

They must try not to pick the thing that is first or last in a given category.

Examples include: Marathon runners and their running times, song streams on Spotify, celebrities and their numbers of Twitter followers.

In round four the remaining five contestants face a range of games. Examples include: Your Mum’s On The Phone, where each contestant asks their mum to telephone Jason within a specified time window - but the contestants whose mums call Jason first and last will be eliminated. Or the five contestants must head out into the audience and pick someone who they think will be neither the oldest nor the youngest. Or a game where contestants must pick audience members who are currently carrying neither the most nor least amount of cash.

The final three contestants are told that there is £10,000 up for grabs. But how do they win it? We could tell you, but then we’d have to kill you.

What attracted you to host First And Last?

I’ve worked with Zeppotron a few times on various projects from doing 8 Out Of 10 Cats to Would I Lie To You? and it’s just always a great team there and I always really enjoy working with them, so that was the first thing when they asked me to meet about it. The second thing is the actual show itself - it just sounded silly really. I’m not going to lie to you - there’s nothing too serious about it and in difficult times, where the news is hard work and everyone is shouting at each other on Twitter, then you need a show where you don’t have to think about it, it’s a bit of early evening fun.

Can you explain what this brand new show is and what viewers can expect from it?

It’s one of the great shows that you can explain in one line. The aim of the game is not to come first and not to come last in any round. It sounds simple but it’s actually quite tricky. Peoples’ instinct is always to win games, so you have to think completely differently to not come first and not come last. It celebrates being in the middle which I think is wonderful because no one gets celebrated for being average but most of us are! It’s a lot of daft silly games with a prize up for grabs. But really it’s watching people play the silly games and what’s great about it is that it’s really playable at home. I can imagine a Royle Family sort of situation where they are sat playing the game going: "What do you think Barb?", which is a sign of a good game show really, that you can play at home as well.

What are your favourite games in the show?

We go from people jumping out of boxes, to weighing potatoes, to guessing how many Twitter followers a particular celebrity might have, which is actually harder than you might think! It’s an eclectic mix, no two games are the same, and it’s so interesting to see how the players all judge it differently.

People jumping out of boxes sounds interesting, can you say anything more on that?

We start off with eleven players in boxes who can’t hear or see anything and they’ve just been told to jump out of the box whenever they feel like it. But whoever jumps out first and last is out straight away, so it’s very silly. It’s just a funny idea that they’ll be telling the family all week: “I’m going on the telly this Saturday, I’m on telly”, and then they were, but for about 30 seconds, so it’s games like that really and there are other games where more skill and luck is required which I think is fun.

We do another game where contestants’ Mums have to call me in the studio, and whoever’s mum rings first and last is out. It’s very funny and silly - if you can’t depend on your mum who can you depend on?

It sounds like it can get quite tense in the studio then?

Oh yes definitely. There’s a lot of jeopardy and that’s what I like about it! No matter how simple the games are it gets really nerve wracking. To win the money you have to be able to think really clearly under pressure and that’s what people find so hard.
Players can win up to £10k, so in one game you’re sat there weighing your potato, but actually it’s a very important potato, it’s a £10k potato!

What game-shows did you love when you were growing up?

I loved, and even now I go back and watch clips of Les Dawson on Blankety Blank. I also loved The Generation Game - that was one of my favourites growing up and I love shows that you can all watch together really as a family, and I miss that a little bit.

So First And Last is one you can watch with the family?

Oh yes absolutely, it’s definitely one you can all join in together and have a play. I’ve actually been playing some of the games with my kids at home - like the internet based higher and lower games which are a lot of fun. And even now before going to bed they’re asking to play, so they are really into it already!

How have you found switching from acting and stand up, to hosting?

Do you have a favourite?

No, I couldn’t say because people might say: “Oh it’s like that is it.” But the great thing about presenting a game show is, in a similar way it’s like stand up, you get to have fun and play with the contestants, do jokes and ad lib when things happen. There is always stuff going on! I also love contestants and having a laugh with them. As a comedian it’s like having a play with the front row at a gig but someone’s already done the research for you, so it’s great fun!

Why should people tune in?

Because you need a bit of a laugh and to be able switch off for a little bit, and to sit down after you’ve had your tea and have a bit of fun. That’s what this show does. It’s one of those shows where, when you get to work on Monday people are like: “Did you see that show on BBC One where people had to jump out of boxes and weigh potatoes?” it is nuts, absolutely nuts - but it is from a great team of people who make great telly, and I can’t wait for people to watch it!