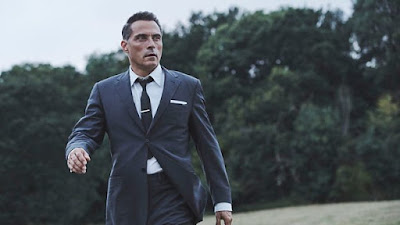 BBC One and Mammoth Screen have released a picture from the latest Agatha Christie adaptation The Pale Horse.

Produced by Mammoth Screen and Agatha Christie Limited for BBC One. Adapted by Bafta-nominated writer Sarah Phelps, The Pale Horse is coming to BBC One in 2020.

The image shows Emmy and Bafta-nominated Rufus Sewell (The Man In The High Castle, The Marvellous Mrs. Maisel, The Father) in the lead role of Mark Easterbrook.

When a murder investigation is launched into the death of a young woman, a mysterious list of names is discovered in her shoe -prompting an inquiry not only to find the killer, but also to understand the list of names. Who wrote the list, and who do these names refer to?

One of those named is widowed antique dealer Mark Easterbrook, who, despite having found love again with new wife Hermia, is still haunted by the tragic death of his first wife Delphine. The Pale Horse tells the story of Mark’s investigation into how and why his name came to appear on the list, an investigation that leads him to the peculiar home of a trio of rumoured witches, The Pale Horse, in the beautiful village of Much Deeping. Word has it that the witches can do away with a rich relative, by supernatural means alone…

Despite Mark’s scepticism towards the paranormal, he cannot help but be consumed by the increasingly strange and extraordinary things that begin to happen around him. Is this too the work of the witches of The Pale Horse, and does this mean he is next on their list? Or can he find a rational explanation and identify the killer before they catch up with him?

Rufus Sewell says: "I’ve always loved watching Agatha Christies. What appealed to me about this script and this character was that the veneer of sophistication, of class and luxury is only possible if it’s supported by a vicious, brutal underbelly. That’s what keeps it all nice."

The Pale Horse was filmed over the summer at The Bottle Yard Studios and in and around the Bristol area.

Also in the cast are:

Completing the cast are Rita Tushingham (Vera, A Taste of Honey) as Bella, Sheila Atim (Girl From The North Country, Bloodmoon) as Thryza Grey and Kathy Kiera Clarke (Derry Girls, Tartuffe) as Sybil Stamford who will play the trio of witches.
Posted by JD at 15:49

Email ThisBlogThis!Share to TwitterShare to FacebookShare to Pinterest
Labels: The Pale Horse