Interview with Miranda Hart - Miranda: My Such Fun Celebration 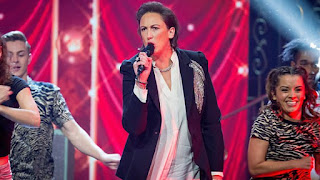 Miranda, what can you tell us about My Such Fun Celebration?

Well, I can tell you it truly was a such fun celebration and to a level I could never have anticipated. Every part of the show was celebrated and we also had underlying messages such as learning to accept your uniqueness which was given an ovation. I felt genuinely overwhelmed by the loving response. Miranda was a show that harked back to traditional musical hall style comedy as well as being a contemporary sitcom so filming it at the London Palladium meant I packed it with sketches, dance numbers and guests.

There’s a moment with one guest that I am really proud of that felt very Morecambe and Wise, who as you know continue to be my comedy inspiration and heroes. In rehearsals we ended up calling it a ‘musical rom com scripted comedy chat show’ and that kind of sums it up really! There’s a bit of everything. And personally it was a surreal dream come true to perform at the Palladium again, but for a show about my own show - that is something I could never have imagined.


What has the reaction from the fans been since you announced the celebration show?

It has been incredibly and surprisingly moving. It really feels like the show has taken on a new life since it was announced. A new young audience have found the show for the first time and those who liked it from the off still seem to watch it and hold it dear to their hearts. Some of the messages have moved me to tears in honesty. And I think that is because although the show started as something just for big laughs, it has now become relevant on a new level in terms of the pertinence of messages for people suffering from anxiety and depression and illness - the message to accept yourself, that everyone feels out of place, that you don’t have to aspire to be a certain way to be loved. If we had celebrated Miranda’s first birthday we wouldn’t have been focussing on that, and now that has become the most important part for me about the celebration. All thanks to the fans for sharing what the show has done for them.


Can you tell us about some of the special guests involved in the show?

I can tell you that my tiny elf of a friend in ‘Stevie’ was of course there by my side, as Sarah Hadland often is in real life and Stevie always is for Miranda. So Miranda and Stevie had a few sketch moments and naturally broke out in to dance where possible. There was a certain someone who just had to say “such fun” and I thought the Palladium roof might come down! Whether my on screen husband Tom Ellis managed to make it over from LA I couldn’t possibly tell you - he has been busy filming Lucifer, but maybe he sent a message, maybe he teleported himself - as I say, I couldn’t possibly say.

There’s one musical guest that’s a lovely reveal moment so I will keep that tucked secretly under my breast shelf, but McFly did a fantastic opening number and it wouldn’t be a Miranda celebration without What Have You Done Today To Make You Feel Proud so Heather Small is there. We also had the Kingdom Choir to sing one of mine and Sarah’s favourite songs to celebrate the Miranda and Stevie friendship.


How did it feel being reunited with the cast again?

Oh it’s sheer delight to be with them again. Us four girls - Sarah, Patricia Sally and myself are dear friends, and there is always much silliness. But rehearsing comedy it is incredibly pressured, technical and difficult so we put work at the front in rehearsals and the larks mainly happen outside of it.


When you first started writing the sitcom, did you think it would end up being as successful as it has?

NO! In fact, on the actual tenth anniversary on 9 November I ended up being home alone as we were in rehearsals for the show. I was exhausted, and was reflecting on how amazed I will always be by its success. I remembered on that night ten years ago I wandered around Hammersmith as it was being aired thinking: “What shall I do for a job now? Will it be weird going back to office work if people recognise me, and I feel sorry for my friends in comedy who will have to try and be polite about the show”, because I thought it would just fizzle away. It was a gamble to put that style of comedy on at the time and I thought perhaps people might just think it eccentric and not see the contemporary reality story behind the big performances and physical comedy. So what has happened to it will always be my greatest joy but equally my greatest surprise.


How would you best describe Miranda and Stevie’s friendship?

They were sisters really - they were able to be completely themselves with each other which included honesty, bickering and competitiveness but held firmly and securely by a deep love and understanding of each other. They have the perfect friendship.


Why do you think the show resonates with so many people?

There is a beautiful moment in the celebration show, which was a surprise to me on the night, when a selection of fans were interviewed as to why they were helped by the show, and the overriding theme was that if Miranda could find love, be loved and accept herself then they can too. That moved me to tears. I also think everyone loves a good love story and I am proud of Miranda and Gary being a good rom com and despite it being set within a sitcom, they were incredibly romantic. And then I think it was just positive, and energetic and silly and it’s so easy for adults to forget to play, to forget to do the things they loved to do when they were younger, to allow themselves to be silly. I think that’s why the galloping became a break out part of the show - it’s mainly adults in the work place that I get sent videos of galloping. It has given people the licence to play in order to reduce stress.


The celebration show is taking place at the home of British entertainment, The London Palladium, how did it feel being on stage at such an iconic venue?

I remember when I was first walked on that stage it was with Sir Bruce Forsyth for the show I did with him to celebrate his 50 years in showbusiness. I had a total out of body moment when I was standing next to him as he tap danced on that iconic stage. So I am glad I had been on that stage before otherwise it might have been overwhelming. But there really is something special about that place. I can’t tell you how beautiful it looks as you stand centre stage and look out, both with and without an audience, and you can almost sense the greats of the past in the wings wishing you well.


Fans of the show have been tweeting their own #MirandaMoments can you tell us about some of the tweets you’ve received.

We have a section in the show when I read them out, and they were pant wettingly funny some of them! It’s something I want to keep going on social media as it’s really connected everyone and people feel less alone in their moments of awkwardness. Mainly there seems to be a lot of lost clothing in awkward situations, a lot of people getting in to the wrong cars - how does that happen so much?! - and a lot of mix ups with mobile phones. There was one dear woman who inadvertently sent a picture of her sunburnt bottom she was meant to send to a nurse friend to her carpet fitters when she was sending them pictures of her hallway and stairs!!! I said to her I would have styled that out and said: “And yes, I would also like carpet on my bum please, so I am permanently comfortable and can sit down anywhere.”


What’s your favourite Miranda moment from the series?

My favourite episode was probably the therapist office one in series two - to write and perform that was unique. And I also loved the episodes that were farcical as farce is something I have always loved and to be able to put it on TV felt like something to be proud of as it’s so technical and intricate to get right. As for a favourite moment - I don’t think I could pick one. The romance of Miranda and Gary generally, the falling in the grave stunt, the surprise of Gary Barlow appearing, and I loved us all being around the dinner table during the dinner party episode when I was trying to impress my future father in law - in particular trying to say grace having it forced upon me by him - and just getting stuck in Abba lyrics around thank you for the music.


Could we see more Miranda in the future?

This Such Fun Celebration felt like it could go both ways. It could be the goodbye forever (so for that reason I really hope people watch it and enjoy it), or it could be a springboard in to some specials. I am very torn - part of me wants to see Gary and Miranda’s married life, part of me wonders whether the story was told and as Miranda gets older it’s a very different kind of show. So the answer remains - I don’t know! But I do know that I am incredibly grateful for every supporter of the show and the legacy that it has created.
Posted by JD at 12:37