Interview with Sarah Hadland - Miranda: My Such Fun Celebration 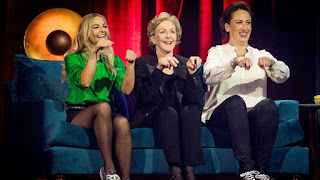 Sarah, what can you tell us about Miranda: My Such Fun Celebration?

It was absolutely brilliant. I think we were all quite unsure about what form it was going to take, but the night itself was just fantastic to be part of, it was amazing. Obviously we knew it was going to be really good fun to see different people again from various episodes, and of course, the core cast, but it was just wonderful.

The fans that came to see the show responded really well and it was a really special feeling to hear all the fans enjoying the references to the show. It was just a great night and I think it's a really unique combination of a celebration of the show including music, dance and classic Miranda moments that people enjoyed, it’s all in there. It's something I think the fans will really love.


What’s the reaction been from fans about the celebration special?

I think probably every day since the show finished I get asked by somebody in the street: "When are we going to do more?" The reaction has always been quite extraordinary to the show and it’s something none of us ever predicted. The feedback I've had in the street to the sitcom is that it’s a show that children, parents and grandparents can all watch together and laugh, a show that brings families together, which is not something I think was in any of our minds when we started doing the sitcom. You don't imagine it will have that impact and it's just a reminder of how important laughing together is. The fans were just desperate for something new, and just to enjoy seeing the cast back together again.


How did it feel being reunited with the cast again?

It was amazing. I mean we’ve all been very close. Miranda wrote this at a time when traditional sitcoms were not in, it was all very observational comedy. We all went on a journey together as a cast that none of us could ever thought. We've all stayed friends so it's really special to see everybody all together. Also, I don't want to give anything away but cast members that have been in different episodes it’s so lovely that they wanted to come back and be part of this, it’s really special.


What was it like being on stage at The London Palladium?

Well funnily enough I've been on that stage twice before, both times through the sitcom. We did the Royal Variety Show a couple of years ago, which was amazing. I also did a charity event with Miranda there, a few years before; it's the most unbelievable theatre. There's something really special about the Palladium and to do an actual show in the nature that we did was really incredible and I think we all felt really lucky. Patricia (Hodge) pointed out that's where Judy Garland sat on the edge of the stage and you're like, wow, this is a really special amazing theatre and to do something really special there, was really fantastic.


Did you think ten years from the first Miranda the show would still be as popular today?

No, definitely not which sounds terrible, but it's true. I thought all this is a very traditional slapstick sitcom. We never predicted that teenagers and young people would like it so much, that really blindsided us all. So to think that ten years later we'd be doing a show on this scale at The London Palladium is quite amazing.


Why do you think the show resonates with the fans so much?

The feedback I get from fans is lovely. The show came at a time when on TV, young women and teenagers felt the representation of women had to be cool, had to look and act a certain way. And then along came our show, (which ironically Miranda and I were in our late 30s when we did it) we were very infantile, the characters were very playful and there was a lot of mucking about. Stevie and Miranda had an amazing friendship as both of them were kind of misfits. We didn't tick any of the right boxes, we weren't cool, we weren't sexy, we weren't confident, and we were both bumbling along. But we had a really good laugh. We have an amazing friendship and we have a great time. And that's all that matters.


How would you best sum up Miranda and Stevie’s friendship?

Miranda and Stevie had a really, really strong friendship in that it's like sisters, and Miranda and I both have sisters and we both really relate to that sort of bickering. But ultimately, you've always got each other's back. I think sister friendship is replicated in the best friendships in that you can say things and do things that nobody else would forgive, but your sister will. But ultimately, what really matters is you've got each other's back, and also that you have fun together.

You both got the same silly sense of humour I know with my sister we laugh at the same stupid things and I think that's something Miranda and I talked about a lot is we both have very close relationships with our sisters in real life. So I think that was something that we both really bonded over. Loveoo came from something that I say to my sister and she says to me, and that's something that got picked up and it's become a big catchphrase for the show. And I think, ultimately, good friendships can be a really meaningful part of life, you want somebody that you can laugh with, but also somebody that’s there for you when things go wrong, and hopefully that's what we kind of portrayed in that kind of sitcom world.


Do you have a favourite #MirandaMoment from the show?

I love the episode in series one with the dogs. I had the Great Dane and Miranda had the Chihuahua and the first time I saw that, I thought they'd done some CGI to it to make me look small. And so the first time I saw that episode I said to Miranda: “Oh, wow, I didn't know that kind of thing happened in sitcoms, you CGI’d me!” She said: “No, that's what you look like next to the Great Dane” and that really, really, really made me laugh because later in that episode, or later in the series, she says: “You look like a Borrower”. And that was exactly what I looked like - a Borrower! So that really, really made me laugh. Because obviously there's a big height difference between me and Miranda but you forget about that because she doesn't go around thinking: “Well, I'm so tall” and I don't go around thinking: “Well, I’m so small”, so you just get on with things. And then when you see something like that on TV you're like: “Whoa, yeah, okay it does look quite ridiculous”. Probably my favourite episode would be when we were competing over a new friend Tamara. There was a sequence where we tried lots of different things to stay awake late so we would do things like eat coffee and put alarm clocks on our ears and things like that - I absolutely loved filming that episode that was really really brilliant.


Finally, what does Heather Small really think of your version of Proud?

I think she's absolutely untroubled, her career is safe! I've been lucky enough to meet her and she’s just the loveliest woman and she is always very gracious about my attempts to sound like her. But yeah, she's not troubled in any way, her career is definitely safe! (laughs).