That Peter Crouch Podcast is Back Stronger for series 3 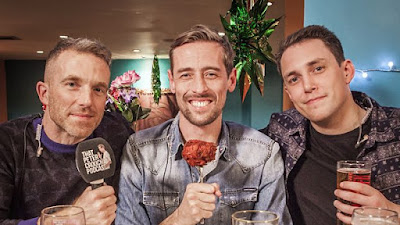 One of the most popular podcasts in the UK, That Peter Crouch Podcast is officially #BackStronger for a third series.

In a special, one-off episode released today, Peter Crouch, Tom Fordyce and Chris Stark announced that they will return to BBC Sounds and Radio 5 live for a new series from 1 January 2020.

New episodes will then be available each week on BBC Sounds, BBC Radio 5 live and podcast platforms everywhere.

Listeners can expect more insights into life as a professional footballer, more laughs and chat than ever before.

Ex-England and Premier League footballer, Peter Crouch is of course at the centre of the huge BBC podcast.

Speaking about the incredible demand for the podcast’s return, he says: “Every morning I look at my phone and see loads of angry tweets and messages from people demanding that we bring the podcast back. And I mean really angry too - almost threatening, in a nice sort of way. For a podcast which basically involves me sitting in a pub with Tom and Chris and talking about football, there seem to be an enormous number of people who are listening.”

“I’m a lucky man. I’ve been able to spend most of my life doing something that is massive fun. But the pod is something else entirely. It’s my favourite part of the week. 18 months ago I didn’t even know what a podcast was. You could probably tell. Now I can’t wait to get started again, and I can’t wait for people to hear it. Hello series three, it's about time...”

In today’s one-off That Planning Meeting, the boys come up with a plan to hijack New Year’s Eve celebrations and invent the first ever ‘Podmanay’. Elsewhere, Chris, who has clearly taken over advertising responsibilities for the new season, needs access to as many toilets as possible.

Series two ended with Crouchfest; a mini-festival at London’s indigo at the O2. The sold out Crouchfest saw guest performances and appearances from the likes of Liam Gallagher, Tom Grennan and You Me At Six.

That Peter Crouch Podcast has amassed a huge following since its debut in September 2018 including celebrity fans such as Ed Sheeran, Robbie Williams and James McAvoy. Since it began, the podcast has been awarded a British Podcast Award, run a festival, and taken Dev from Coronation Street to a curry house in Ealing.

So, scrap your New Year’s Resolutions. Start the new decade right… with That Peter Crouch Podcast.