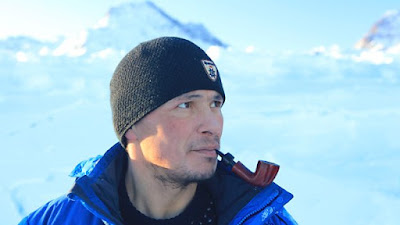 The Last Igloo is a very simple film: the story of one man - an indigenous hunter called Julius (pictured above) - as he sets out from an Inuit settlement into the wilderness of Greenland to fish, hunt, and eventually build an igloo. Of course, making something simple means that every detail is amplified. In one way, that was the point of the film - we are so relentlessly deluged with information that it’s easy to forget that TV should also be about giving us space to think and to feel.

Witnessing Julius’ life on a very sensory level - as this film allows the viewer to do - you realise that the apparent simplicity of life in the arctic belies extraordinary expertise, complexity and a constant battle against an environment where a single mistake can cost your life. Because The Last Igloo is all about immersing the viewer in a landscape of snow and ice, the beautiful scenes, filmed and directed with great skill by Christian Collerton, needed to be matched by the sound. For that, soundman Mick Duffield recorded in surround sound, not only above ground, but beneath the sea ice, and renowned Icelandic composer Biggi Hilmars created a score that feels as though it emerges almost naturally from the mountains and glaciers of Greenland.

Above all, The Last Igloo is a testament to Julius and the native people of Greenland. Julius was a dream contributor - not only for his abilities as a hunter and igloo builder - but for his facility to talk about his way of life with lyricism and depth of thought. But Julius’ generation of hunters are possibly the last. The great poignancy of the film is that it captures a world that is, due to climate change, literally melting away, and may soon be gone forever.
Posted by JD at 10:24

Email ThisBlogThis!Share to TwitterShare to FacebookShare to Pinterest
Labels: The Last Igloo