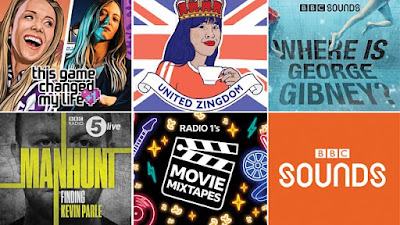 Listeners will be able to enjoy more true crime and investigations, entertaining comedy and chat, original journalism and brilliant storytelling, as well as great new voices on BBC Sounds.

Jonathan Wall, Controller of BBC Sounds, says: “Sounds is growing and growing with 3 million people now coming to us for music, radio and podcasts each week. We keep upping the ambition for our on demand audio and I’m delighted with the variety of great podcasts and music we’ve got coming up. Whether people want laughs and entertainment, or insight and intrigue, Sounds has something relevant for everyone. It lets us give new voices a platform to talk about what matters as well as bring the best of what the BBC does to new listeners.”

In the coming months on BBC Sounds there are:

Seven new podcasts in which younger voices explore the subjects that matter to them, such as United Zingdom in which Zing Tsjeng figures out whether to become British; gaming journalists Julia Hardy and Aoife Wilson present This Game Changed My Life; in new series Jacob Hawley: In Love the comedian looks at different aspects of relationships and he returns with more episodes of Jacob Hawley: On Drugs too; in Them Ones three best mates from Birmingham reveal their Whatsapp chat and, consequently, the inner workings of their lives; and 5 live’s Hope High follows the families of secondary school students in Huddersfield. Power Out is a pacey thriller from Radio 4 about young people taking power in their own hands; and Asian Network launches new podcast Bollywood Uncovered

New podcasts from BBC news and current affairs: The world’s longest running current affairs programme Panorama launches a podcast; and Americast with Emily Maitlis and Jon Sopel will share the latest drama from the race for the White House. The most popular podcast on Sounds at the end of last year - Brexitcast - is evolving into Newscast taking listeners behind the scenes for an inside look at the biggest news stories

Three true crime podcasts including Manhunt: Finding Kevin Parle from Radio 5 live and hosted by Peter Bleksley; Where is George Gibney? in which journalist Mark Horgan investigates the internationally-renowned Olympic swimming coach; and Mortem which tells the story of three bodies through forensics science

Matt Lucas, 1Xtra’s Sideman and Dotty bring listeners brand new comedy chat. There will be jaw dropping conversation on The Dotty Podcast; on Weird Flex But OK, Sideman meets people with weird but wonderful habits; and on Bitch Bitch Bitch, Matt Lucas brings guests together to gossip about the unpleasant side of jobs many might wish they had

More great music content including Sounds Of The 90s with Fearne Cotton, a nostalgia drenched celebration of the best music and pop culture from the decade; and in podcast James Acaster’s Perfect Sounds the comedian proposes that 2016 is the greatest year for music of all time, sharing his obsession with fellow comedians. BBC Sounds is also launching four brand new music mixes including 1Xtra R&B Chill from Nadia Jae and Radio 1’s Movie Mixtapes from Ali Plumb
Posted by JD at 22:03