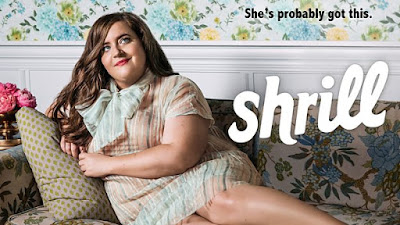 BBC Three has acquired the UK rights for the new 8x25’ series from Warner Bros. Television. The second series will be available as a boxset on BBC iPlayer from Saturday 25 January.

Aidy Bryant (Saturday Night Live) returns as Annie, who’s feeling pretty good after having faced her demons - her mom (Julia Sweeney), her boss (John Cameron Mitchell) and her troll... With boyfriend Ryan (Luka Jones) and best friend Fran (Lolly Adefope) by her side, she’s ready to take on the world.

But was hastily quitting her job and jumping into a relationship with someone a little less than career-focused the best idea? Annie’s on a path to self-discovery, joined by both Fran and her mother, as they figure out what they really want in life.

And while Annie doesn’t always find it easy - she’s no longer the doormat she once was. Annie’s determined and she’s only just getting started...

Sue Deeks, Head of BBC Programme Acquisition, says: “We are delighted that Shrill’s mix of sharp social commentary, engaging characters and relatable situations have proved to be such a hit with BBC Three viewers.”

Email ThisBlogThis!Share to TwitterShare to FacebookShare to Pinterest
Labels: Shrill