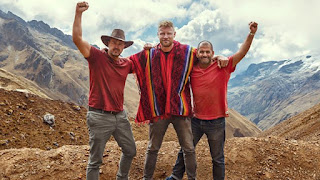 Fresh from the success of their first series together, Top Gear’s new line up of presenters - Freddie Flintoff, Paddy McGuinness, and Chris Harris - get up to ever more mischief as they travel the globe in pursuit of hijinks and motoring mayhem.

Expect to see bungee jumping in a car, an epic race between a fighter jet and the latest McLaren hypercar, a spectacular roadtrip through Peru plus top celebrity guests in the studio, and lots of laughs. Having taken the world’s biggest motoring entertainment show to a whole new level in 2019, audiences will be on the edge of their seats in 2020.

A summer holiday in (very) cheap convertibles
The average cost of a summer holiday is £600. Per person. Six hundred quid to sit in a smelly metal tube for a couple of hours, all for a bit of sun on your face. But what about if, instead of spending £600 on a holiday, you spent it instead on a second-hand convertible? A far nicer way to get a bit of sun on your face, surely?

To find out, the presenters each bought themselves a very cheap cabrio - Chris a Merc SLK, Paddy a very nineties Escort, and Fred a monstrosity called the Chrysler LeBaron - and set out on a glamorous journey from Bognor Regis to Essex. During which they were squirted with a ‘low-friction synthetic sweat substitute’, pelted with golf balls, and marooned in the sea.


Chucking a car off a dam
Yes, Top Gear is attempting to bungee-jump a car. A Rover Metro cabrio, to be precise, with a Freddie Flintoff at the wheel. Off a massive Swiss dam. This has never been done before, at least not successfully.

You might ask ‘why’. Freddie did, quite a number of times, while suspended 400 feet above an unyielding valley floor. The answer? Not merely a bid to discover if Mr Flintoff has any function remaining in his fear-gland (spoiler alert: definitely a bit), but also Chris’s latest money-saving tip.

Get ready for one of the most palm-sweat-inducing bits of telly of the year.