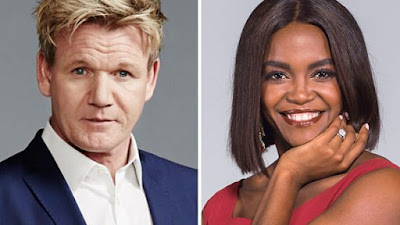 Following a jam packed year of entertainment on the BBC, Kate Phillips, Controller of BBC Entertainment, has today announced two brand new BBC One programmes Gordon Ramsay’s Future Food Stars and Oti’s South African Odyssey, alongside the return of BBC Two’s The Ranganation and BBC Three’s Angels Of The North.

The world’s most famous chef, Gordon Ramsay, fronts a brand new eight-part competition series to hunt down the UK’s most exciting and innovative new food and drink entrepreneurs; while Oti Mabuse returns to her country of birth eight years after she left, to show us her South Africa, a country she feels is often misunderstood.

Kate Phillips says: “It’s key for me to keep growing the entertainment story at the BBC as a much loved, talked about, shared experience. Our programming is big and bold across all channels, and we continue to keep the greats great and grow the new greats.

"In 2019, Strictly Come Dancing was the biggest entertainment show in the UK across all channels with a series average of 10.4m viewers. We also saw a huge number of younger viewers coming to the BBC for entertainment programming with The Apprentice being the top entertainment series for young audiences on BBC One, Top Gear being BBC Two’s highest rating show for young audiences (across all genres), and RuPaul’s Drag Race becoming the second biggest BBC Three show of 2019 (behind Killing Eve) with 64% of requests from 16-34yrs.

"We’ve also succeeded in targeting underrepresented areas with shows like Angels Of The North which skewed considerably towards the North East and Cumbria, and we saw new quiz show The Wall perform strongly across all our underserved audiences.

"Of course, all these shows will be returning to the BBC this year, and I’m excited to announce two new shows to complement our 2020/21 BBC One entertainment programming. Outspoken and world famous Gordon Ramsay is coming to BBC One with his brand new show Gordon Ramsay’s Future Food Stars - Gordon is hugely popular with audiences of all ages and promises to put 12 entrepreneurs through their paces as they compete for Gordon’s investment in their food and drink ideas.

"We’re looking forward to taking BBC One’s dancing sensation Oti Mabuse back to her home in South Africa, to show us the country she believes is often misunderstood, in Oti’s South African Odyssey.

"We will also be seeing the return of Romesh Ranganathan’s topical comedy show The Ranganation, which was BBC Two’s biggest new entertainment show for under 45s and 16-34s since 2016 (Robot Wars), and Angels of the North returns to BBC Three for a no holds barred insight into Sammyjo’s hair extensions super salon in Tyneside.

"With all these great shows alongside the soon to come Little Mix: The Search and Peter Crouch’s Euro Fest 2020, the year ahead is ready to entertain the nation, and there really is no greater public purpose than entertaining people.”
Posted by JD at 19:18