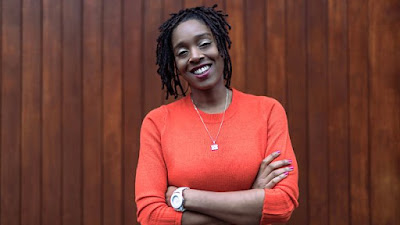 Stand-up comedian Athena Kugblenu is the recipient of this year’s Felix Dexter Bursary scheme.
The six-month bursary, run by BBC Comedy and supported by BBC Writersroom, is awarded to aspiring comedy writers, with the aim of making a positive intervention to address an under-representation of BAME professionals in comedy production in broadcasting. She will be based in BBC offices across the UK whilst on the bursary.

Now in its third year, the Felix Dexter Bursary is designed to find writers with a fresh, unique point of view and the potential to help shape the future of comedy. It is open to black, Asian and other ethnic minority writers or writing duos who are aged 18 or over.

Athena Kugblenu is a stand-up comedian and emerging comedy writer. In 2015, she was the BBC New Comedian of the Year finalist. Her stand-up style leads with intelligent, topical and thought-provoking jokes, with an edgy sting. Her first solo show, KMT, played the Edinburgh Fringe to four and five-star reviews, as did her 2018 follow-up Follow The Leader. Both featured in The Guardian, The Independent and The Telegraph’s best jokes compilations.

As a regular co-host on The Guilty Feminist podcast, Athena is an exciting voice bringing her unique perspective on the subjects of race, gender and how equality shapes our modern lives. Athena is prominent on twitter and has also written content for Time Out and Stylist Magazine where she brilliantly showcases her wit and wisdom both online and in print.

Athena Kugblenu says: “I'm thrilled and a little bit stunned to be awarded this bursary, especially one in the name of an indisputable comedy genius. This is a huge opportunity to develop my comedy writing and further my career, and I can't wait to get started.”

Sarah Asante, BBC Comedy Commissioning Editor, says: “We’re very excited to welcome Athena to the third year of the Felix Dexter Bursary and hope that the training on offer leads to finding her voice and cementing her place in the scripted world.”

The first Felix Dexter Bursary was launched in 2017 after Paul Whitehouse (Trustee of the Felix Dexter Foundation) and BBC Comedy Commissioner Shane Allen agreed that supporting and encouraging writers from an ethnic minority background would be a fitting tribute to the late comedy actor and writer, who featured in iconic BBC comedies including The Fast Show and The Real McCoy.

On a practical level, the bursary gives up-and-coming talent the chance to make comedy writing their main focus for six months, while immersed in comedy production. They hone their skills while gaining experience on a range of BBC comedies across radio, TV and online, on panel shows, shorts, sitcoms or comedy entertainment shows. The programme offers the writers the support they need to take the next step in their career.