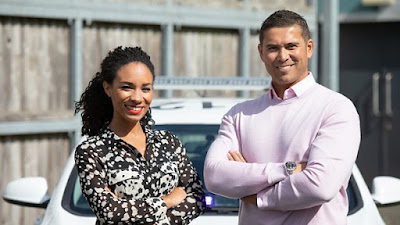 Crimewatch Roadshow Live, with Michelle Ackerley and Rav Wilding, is back on BBC One Daytime from Monday 9 March (9.15am) for three weeks. The programme will be appealing to the public to help tackle everyday crimes as well as crack some of the UK’s biggest unsolved cases.

Every weekday morning the programme will feature dramatic reconstructions of cases, designed to generate calls from viewers with crucial information to help police investigations.

In the studio, former detective Rav Wilding will reveal the latest crime fighting science, gadgets and techniques. He’ll also be calling on viewers to name more criminals caught on CCTV, and help the police track down individuals featured in a daily 'wanted faces' gallery.

Rav says: "I’m really excited to be bringing Crimewatch Roadshow Live back to viewers’ screens this March. Now, more than ever, it is hugely important - both in terms of the crucial role it enables the public to play in catching criminals, but also in getting vital crime prevention messages out to the people watching.

"For me, getting to speak to detectives and victims on the front line of crime is both a responsibility and a real privilege. The dedication of emergency teams up and down the country is also incredibly humbling and it’s great that we can showcase even just a fraction of their hard work on the programme.

Reporter Michelle Ackerley is also gearing up for three action-packed weeks of live shows. Michelle will travel the country, meeting detectives determined to solve crimes in their area - she’ll also go behind the scenes with police and emergency services, getting to experience first-hand the many ways they work to protect the public.

Michelle says: "I’m definitely looking forward to being back on the road with the Crimewatch Roadshow Live team. Not only do I get to see the incredible work of emergency crews up and down the country, but I also get to try my hand at all manner of things. This year is no exception - in fact if anything, they’ve ramped it up a notch! I don’t want to give too much away, but I think one of my endeavours is going to make a bit of a ‘splash’.

“And of course, once again we’ll be asking for viewers’ help to solve really important crimes from around the UK, so make sure you tune in - it could be your call that makes a difference."
Posted by JD at 14:19