Channel 4 is to return to Victorian London for a second helping of Year of the Rabbit. The 6x30 comedy series will once again focus on tough booze-hound detective Rabbit (Matt Berry), his hapless partner Strauss (Freddie Fox) and the country’s first female police officer Mabel (Susan Wokoma) as they fight crime in London’s east end.

At the end of the first series Lydia (Keeley Hawes) had pulled the wool over everyone’s eyes, with Strauss thinking they were lovers and Mabel joining Lydia’s secret female society, mistakenly thinking it was a power for good. After Rabbit and the gang foiled Lydia’s plot to take down London, saving the day.  But, with Lydia still at large and Her Majesty requesting an audience with Rabbit, Strauss and Mabel for a secret job…anything could happen.

Matt Berry commented: ”I’m looking forward to Inspector Rabbit returning back to our screens to fight crime in the past. This time he’ll deal with all sorts of unearthly forces, including the Royal Family! Victorian London is presently very much where it’s at.”

Fiona McDermott, Head of Comedy at Channel 4, says: “Year of the Rabbit is one of the most glorious, gutsy and audacious comedies on TV, made by a fantastic cast and crew who relish every detail. We're thrilled to welcome it back. Here's to more absurd capers in the dark underbelly of Victorian London.”

IFC and Sundance TV Executive Director Blake Callaway added: “Ever since he guest starred on Portlandia, we knew we wanted more Matt Berry on IFC. An often-drunk, frequently filthy, and always foul-mouthed Victorian detective hits the perfect ‘slightly off’ spot.” 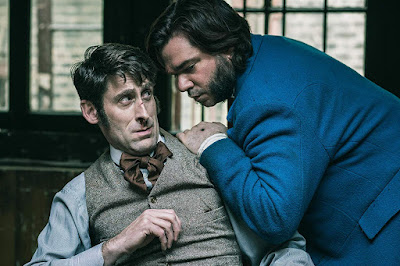 Email ThisBlogThis!Share to TwitterShare to FacebookShare to Pinterest
Labels: Year of the Rabbit