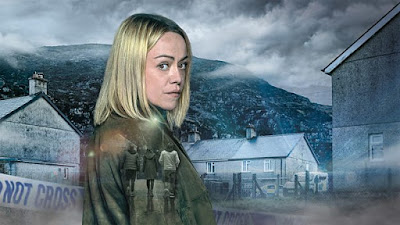 The hit crime drama Hidden continues this year with a six-part second series following the success of the chilling first series.

Returning to BBC One Wales on Tuesday 11 February at 9pm and BBC Four on Saturday 15 February at 9pm, the second series will see the return of DCI Cadi John (Sian Reese-Williams) and DS Owen Vaughan (Siôn Alun Davies).

When the brutal murder of an ex-teacher is discovered following an anonymous phone call, Cadi leads an investigation in the slate-strewn mountains of Blaenau Ffestiniog.

While Cadi and Vaughan have a new case on their hands however, three young friends (Mia - played by Annes Elwy, Connor - played by Steffan Cennydd and Lee - played by Siôn Eifion) have blood on theirs. As their lives - and the investigation - unravels, they soon find out there is nowhere to hide.
Posted by JD at 22:06

Email ThisBlogThis!Share to TwitterShare to FacebookShare to Pinterest
Labels: Hidden