Filming on the next series of Line Of Duty has begun. 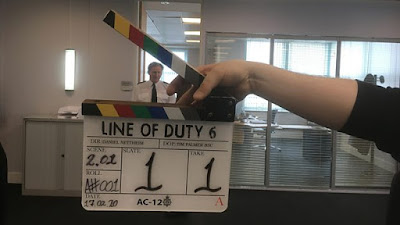 The sixth instalment of Jed Mercurio's hit thriller is set a year and a half on from the events of series five, and will feature a brand new case for AC-12, focused on an enigmatic Detective Chief Inspector.

As previously announced, Kelly Macdonald will star as the DCI in question - Joanne Davidson - a senior investigating officer on an unsolved murder case. Series leads Vicky McClure, Martin Compston and Adrian Dunbar will all return.

Joining Line Of Duty for the first time this series are Shalom Brune-Franklin (Our Girl, Cursed), Perry Fitzpatrick (This Is England, I Am Nicola), Andi Osho (Kiri, Curfew) and Prasanna Puwanarajah (Doctor Foster, Patrick Melrose). 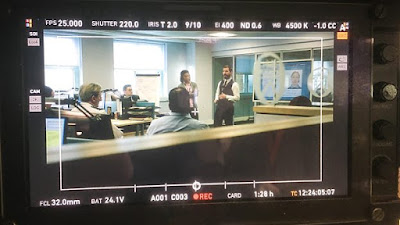 Both images are courtesy of Jed Mercurio

Line Of Duty is written and created by Jed Mercurio, and made for BBC One by World Productions. The new series will be directed by Daniel Nettheim (Broadchurch, Doctor Who), Gareth Bryn (Hinterland, Last Tango In Halifax), and Jennie Darnell (Bodyguard, Hetty Feather), and the producer is Ken Horn (The Moorside, Line of Duty series five). Executive producers are Jed Mercurio, Simon Heath for World Productions, and Tommy Bulfin for BBC One.
Posted by JD at 14:38