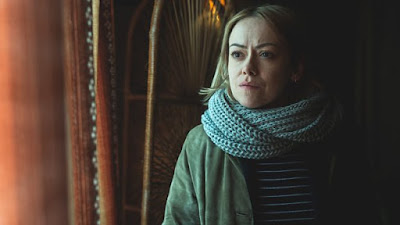 Were you surprised by the success of the first series?

Not so much surprised as proud. While filming it felt like we were making something of high quality and so it was lovely to see that people really enjoyed it and wanted more. And it’s great to see how well it’s been received in other countries - knowing that we’ve played a part in bringing Welsh drama onto the international stage is wonderful.

Were there any new challenges for you personally and for Cadi in the new series?

Series two picks up around nine months after series one ends. We find Cadi trying to deal with the grief of losing her father, while trying to keep her head in her work.

It’s a difficult time for her - just as one begins to come through the initial shock of losing someone and start to try and deal with it, that’s the time that everyone around you starts to forget and move on. She’s also faced with dealing with the estranged daughter of the victim of the case, and the parallels she sees between the two of them are difficult for her to navigate professionally.

What was different, if anything, for you in series two?

It was just so great to come back and revisit a character to see how she’d changed in that time. And it was a joy to be working with the same team again - we’d all been so proud of the work we’d achieved with series one, so for us all to come back together for a second series was really exciting.

The second series introduces a whole new set of characters and plots. How did that suit you?

Obviously, with a new case, we had a new cast of guest leads so it did feel strange for a time to be without the brilliant actors we had first time round. But it means it keeps it feeling fresh - almost like a brand new job. And our new guest leads were all so brilliant that it was just lovely to come to work every day knowing we had something exciting and new on our hands.

The new series is set in new location in the form of Blaenau Ffestiniog. How was that?

Obviously the weather in north Wales can be challenging at times! But it serves the show so well that it’s impossible to complain - it looks so great on screen. And the people of Blaenau were so welcoming and happy to have us. We had a great time.