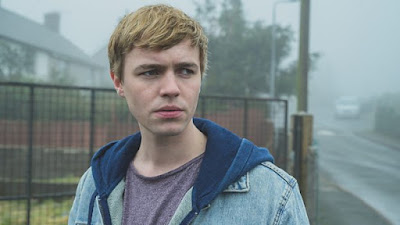 Can you tell us a bit about yourself?

I’m from Carmarthen. I moved to London after school to train at the Guildhall. Since graduating in 2017, I’ve been in a few films, a couple TV series and travelled the world taking three plays on tour with Shakespeare’s Globe! But Hidden was by far the largest project I’ve been involved in, in terms of scale and ambition it was on another level. The locations and the storyline really stretched me and I learnt a lot from the whole process. I hope you enjoy it!

Your character Connor is new to the series, can you describe him and how he fits into the storyline?

Without giving too much away, Connor has moved to Blaenau from south Wales with his Mam and brother. Let’s just say he’s fallen in with the wrong crowd and from the moment we meet him we know he’s found himself in the wrong place at the wrong time. I can’t say more than that!

Tell us about the locations featured in series two...

The series is based in Blaenau Ffestiniog, which is such a unique place in north Wales. It’s surrounded by enormous slate piles that create a sort of mini climate of its own. When you get up out of the town and see what’s all around, the scenery is breath-taking.

What was the most challenging aspect of filming Hidden?

The weather we were faced with was so erratic; we had mini heatwaves, some snow, hail, storms all within a single month. I remember being soaked through getting back to my hotel at night on numerous occasions. Another challenge is shooting bilingually, flipping back and forth to shoot everything twice is tricky, especially at the start, you find yourself speaking the wrong language quite often. But by the end, they seem to offer different insights into the characters and their mentalities.

What did you enjoy most about being part of the new series?

It was a long shoot, five months. During that time you create such a team effort mentality. Everybody chipping in when we’re all freezing in a quarry at 4am. We felt like a big unit by the end, getting it done together, it was lovely.
Posted by JD at 22:09