Mandy to get full series on BBC Two 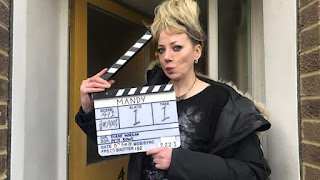 Filming began today on Mandy, a brand new comedy series from Diane Morgan, made by BBC Studios.
Mandy (6x15') debuted as part of Comedy Shorts on BBC iPlayer in 2019 and stars Diane Morgan (Cunk On Britain, Motherland, After Life) in the title role. As well as appearing as the lead character, Diane writes and directs the series - the original Comedy Short being her first foray behind the camera.

Mandy is a woman with dreams. Big dreams. Most of all she dreams of breeding Doberman Pinchers. But there are hurdles to overcome before that dream can become a reality. So, in this series we'll see her go on a health kick, rent out her small back room on Airbnb and attempt a series of short-lived jobs in the modern gig economy.

The series also stars Michelle Greenidge (After Life, Code 404) as Lola, Mandy's friend and confidante in the local nail bar, with further cast members that will be announced in due course.

Diane Morgan says: "Why do they insist on sticking mayonnaise in everything? That's not a question that this series of Mandy will answer, but surely someone should be looking into it? Panorama?"