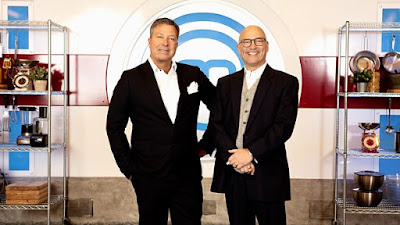 The 60 contestants starting the competition range from a cattle farmer and hairdresser to a music festival producer and an architect - all with the common goal - to prove their worth in the MasterChef kitchen and take home the prized trophy.

Kicking off the competition, the cooks this year face two brand-new challenges in the heat rounds. Success will earn them the right to wear a MasterChef apron. Their first test is the Signature Dish round - in which the six contestants bring from home the ingredients they need to put their best culinary foot forward. They have an hour and 15 mins minutes to deliver an impressive plate of food. The best two cooks, who wow John and Gregg from the start, earn themselves a MasterChef apron and go straight through to the third round cooking for past MasterChef winners and finalists. The remaining four get a second chance to prove themselves in another new test - the Three Ingredients Challenge. They must think on their feet and create a dish that includes all three of the ingredients included in the mystery box in front of them. It’s crucial they make an impression because at the end of this challenge, two more cooks earn themselves a MasterChef apron and two are sent home.

The remaining four contestants must now produce their own two-course menu to impress not only John and Gregg, but three exceptional MasterChef finalists and winners, who have all gone on to work professionally in food and vividly remember their own experiences, having walked in the shoes of this year’s aspiring chefs. With three quarter final places up for grabs, nobody wants to be sent home.

The six best cooks from the heats return for the quarter final - where they come face to face with a one of the UK’s top food critics - (in order of appearance) Jay Rayner, Grace Dent, William Sitwell, Tom Parker Bowles and Jimi Famurewa. Each critic sets the home cooks a challenging brief that they have 90 minutes to deliver. Only the best contestants will be judged worthy by the critic and the MasterChef judges of continuing in the competition.

After the five heat weeks, it’s knockout week, where the strongest 16 cooks from the competition return. Split into two groups of eight, over two episodes, the cooks are tasked with creating a dish that they would put on their own restaurant menu or feature in their own cookbook, to keep their place. It’s a high stakes cook off - three go home and the remaining five survivors of each round go on to experience working in a professional kitchen for the first time. They will be cooking in a restaurant service delivering dishes to paying diners. The first group will cook at Da Terra, in East London, which was awarded a Michelin star just eight months after opening, and the second at Wood in Manchester under the watchful gaze of MasterChef Champion 2015, Simon Wood. Simon knows full well the pressure of the competition and what it takes to succeed in the professional world.

Rounding off knockout week, the remaining 10 contestants come together for a gruelling cook-off, aiming to secure a place in the semi finals, and one cook’s journey ends.

The pressure is ramped up for the nine semi finalists. Any small mistake could cost them their competition. First, they are split into three teams cooking for special Trafalgar Night dinner. Each team must cook a fine-dining course in the galley of HMS Diamond for over 100 of the ship’s company. Then it’s back to the MasterChef kitchen for a cook-off centred around John and Gregg’s favourite ingredients, after which, two contestants must go home.

In the second semi final, the seven remaining hopefuls are challenged with cooking at an entirely new level - recreating the exquisite dishes of a Michelin-starred guest chef, Tom Kitchin. For two cooks, their MasterChef journey will come to an end.

The finals are in sight, but not before one last nail-biting semi final test - the infamous Critic’s Table. The five cooks must produce a fine-dining dish for the judges and exacting critics, William Sitwell, Grace Dent, Jay Rayner and Jimi Famurewa. Holding their nerve or cracking under the pressure decides their fate - only four can make the finals.

After seven demanding weeks, the four MasterChef finalists must give their all for the ultimate drive to culinary glory.

The finalists’ first daunting culinary challenge is on the island of Mauritius - a gastronomic melting pot that fuses the cuisines of Africa, Europe, China and India to create a style of cooking that is truly unique. The finalists have to keep their culinary wits together as they are challenged to recreate both high-end Mauritian fine-dining dishes and traditional street food tutored by the islands leading chefs. Cooking with ingredients and techniques they have never seen takes them totally out of their comfort zone.

Back in the UK, the second finals programme stretches the contenders to their limit as they are given an extraordinary opportunity to learn from one of the world’s greatest living chefs - Albert Adria. Widely recognised as the world’s best pastry chef, Albert - the former creative director and pastry chef at El Bulli, has won Michelin accolades for restaurants in his native Barcelona. In the last 18 months he has opened in Cakes and Bubbles in London’s Café Royal - a restaurant dedicated to his extraordinary pastry creations. The four MasterChef finalists must learn and recreate his extraordinary sweet creations for a chef’s table of the country’s leading pastry chefs. It’s their chance to learn from a master and put it into practice because back in the MasterChef kitchen, they then have to cook their interpretation of a classic dessert. Only three can go to through to the MasterChef final.

At the end of this relentless and exhilarating journey, the mother of MasterChef cook-offs awaits the final three. The hopefuls must bring everything to the table - from their honed techniques and stamina developed through weeks of challenges, to inspiration from locations and chefs they have worked with. These amateur cooks must pour their hearts into delivering the best three-course menu of their lives for John and Gregg, in the final bid to claim the prestigious title of MasterChef Champion 2020.
Posted by JD at 18:41