My Left Nut - A coming-of-age comedy drama about friendship, family, grief and testicles 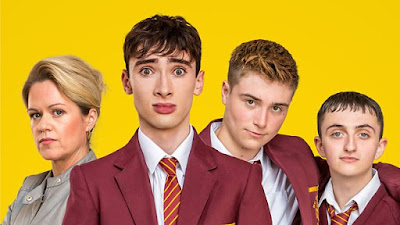 Based on the award-winning stage play, My Left Nut is a coming of age comedy drama about friendship, family, grief and testicles written by Irish newcomers Michael Patrick and Oisín Kearney in their first project for the BBC.

The story is based on real life events after Michael found a swelling on his testicle when he was 15.

The series follows schoolboy Mick (Nathan Quinn-O’Rawe) and his journey after discovering a swelling on his testicle. He can't tell his dad - he died seven years ago. He can't tell his mum Patricia (Sinéad Keenan) - she's got a million other things on her plate. He can't tell his schoolmates.... but there's an upside to rumours about the bulge in your trousers. And it’s not like it’s going to complicate things between Mick and his first girlfriend anyway, right?

Email ThisBlogThis!Share to TwitterShare to FacebookShare to Pinterest
Labels: My Left Nut