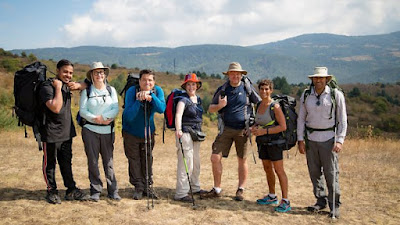 Hot on the heels of the first two critically acclaimed series that saw well known D-Listers embark on a journey of discovery, to Santiago and Rome, Pilgrimage returns to BBC Two this spring.

The new facers who let's be honest you will struggle to recognise will take to the open road, as they follow a completely different pilgrimage. This time, in Pilgrimage: The Road To Istanbul, journalist Adrian Chiles, a converted Catholic; former politician Edwina Currie, a lapsed Jew; Olympian Fatima Whitbread, a practicing Christian; broadcaster Mim Shaikh and television presenter Amar Latif, both Muslims; and two confirmed atheist’s, comedian Dom Joly and actor Pauline McLynn; will live as simple pilgrims following an ancient military route to the historic city of Istanbul, which has been transformed into a modern-day path of peace.

Formed just over ten years ago and designed to promote tolerance for all faiths and cultures, Pilgrimage: The Road To Istanbul will be a journey of discovery and adventure for our pilgrims. Donning backpacks and walking boots, they’ll stay in basic hostels, sleep in shared dorms, and follow a largely untrodden route. Starting in Serbia’s capital city Belgrade, the pilgrims will travel through Bulgaria and the mountainous Balkans, before crossing the border into Turkey, with their goal of reaching Istanbul and the magnificent Suleymaniye Mosque.

This year’s celebrity pilgrims have just over two weeks to complete their pilgrimage. They’ll visit historical monuments and buildings and see first-hand how religions have clashed over centuries from the Ottomans, right up to more recent conflicts.

With over 1,000 kilometres to cover, how will the pilgrims cope with the physical challenge and will this journey change how they feel about themselves and their beliefs?
Posted by JD at 18:57