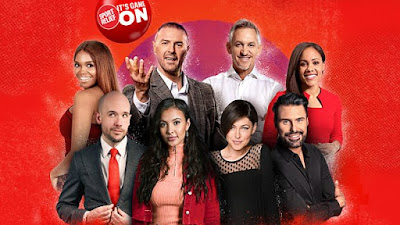 Will the identity of H finally be unveiled? Why are Steves around the UK being chased down by a blonde assassin? All will be revealed as Sport Relief returns to BBC One for 2020.

A star-studded night of music, entertainment and comedy
*A stellar line-up of hilarious sketches including, Line of Duty and a parody of Killing Eve feature in Sport Relief’s Night of TV
*New faces Alex Scott, Oti Mabuse, Emma Willis, Tom Allen, Maya Jama and Rylan Clark-Neal join Gary Lineker and Paddy McGuinness on presenting duties
*Sir Andy Murray joins comedian Romesh Ranganathan for a round of mini golf
*Special documentaries and programming to air in run up to the big night, including Greg James’ look back at some of the best-ever Sport Relief challenges
*Sport Relief 2020, live from Salford Friday 13 March, BBC One from 7pm

Live from Salford, the Night of TV will serve up some hilarious sketches giving the Sport Relief take on some of the country’s most loved programmes. A special visit to AC 12 sees Line of Duty’s Arnott, Fleming and Hastings grill corrupt cop Jason Isaacs. Will his famous, yet inept, lawyer be able to bail him out?

Meanwhile, Steves of the UK need to be on guard, as nobody is safe from the mysterious blonde assassin in a special Killing Eve spoof - Killing Steves.

The scenic setting of Salford Quays welcomes back the Clash of the Channels Boat Race - this time with celebrity rowing teams from Channel 4 and Sky in tow to give BBC and ITV a run for their money.

These are just some of the highlights as famous faces come together for sketches and live moments which see them being pushed out of their comfort zones to help raise money to tackle issues such as mental health stigma, domestic abuse, homelessness and child poverty, both in the UK and around the world.

Hosting the live show from 7pm will be newcomers Alex Scott, Oti Mabuse, Emma Willis, Tom Allen, Maya Jama and Rylan Clark-Neal as they join Gary Lineker and Paddy McGuinness for an evening filled with fun and fundraising.

Throughout the night, there will be a look into how money raised through Sport Relief can help vulnerable people in the UK and across the world live happier, healthier, safer lives, through a series of appeal films.

Outside the Night of TV, a number of special programmes are sure to whet the appetite; Greg James looks back at some of the most inspiring celebrity Sport Relief challenges to date in Greg James’ Sporting Heroes, Sport Relief: The Heat Is On follows a team of brave celebrities on a gruelling four-day 100-mile expedition across the Namib Desert, and a 30-minute special looks back at Gareth Thomas’ incredible cycling challenge as he cycled 500 miles to deliver the BBC Sports Personality of the Year trophy to 2019 winner Ben Stokes to raise money for Sport Relief.
Posted by JD at 21:24