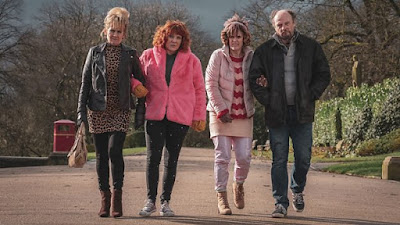 Alma’s Not Normal follows Boltonian wild-child, Alma Nuthall and her family of eccentric, unruly women.
After a recent break-up, Alma tries to get her life back on track. But with no job, no qualifications and a rebellious streak a mile wide, it’s not going to be easy. Meanwhile her mum, who is battling a heroin addiction, has been sectioned for arson and her vampish Grandma Joan wants nothing to do with it.

Alma’s Not Normal offers a bitingly funny and unflinching take on class, sexuality, mental health and substance abuse. It celebrates women dealing with the hands they’ve been dealt while doggedly pursing their dreams.

Can you tell us a bit about your journey from winning the BBC’s Caroline Aherne Bursary to creating Alma’s world for the pilot?

Oh it’s been fabulous! I’ve wanted to write this sitcom for years, so as soon as I won the bursary I went straight into planning mode! I remember sitting with Kate Daughton, Commissioning Editor for BBC Comedy, just after I’d won it and excitedly talking her through my ideas; playing her bits of music, talking her through the characters, even acting bits out! It must’ve been quite intense for her to be honest! I then started to work with producer Nerys Evans at production company Expectation and script editor Andrew Ellard on a pilot script. After that we did a rehearsed reading for the BBC in front of an invited audience and Patrick Holland, Controller of BBC Two. The cast were amazing and the show was surprisingly raucous and anarchic for a random Tuesday afternoon in a brightly-light church hall. After the read through Patrick decided to give us an on the spot pilot commission for it to be filmed and bobbed on BBC Two! It was a wonderful moment! BBC and Expectation then worked hard to find me a fantastic team to go into production with. I had the shit-hot Gill Isles producing it and the super talented Andrew Chaplin directing it - and a full production of truly brilliant people, not to mention a stellar cast! So I felt in great hands going into production. I absolutely LOVED filming it and editing it. I learnt so much whilst also having the autonomy to make sure it came out exactly how I wanted it to. The perfect scenario really!

Have you always wanted to write for television?

Yeah - since I was a kid. But I found being from my background and experience has a glass ceiling. I couldn’t seem to break through to television until this award. It got me in the room with commissioners so I could tell them directly who I was and what I wanted to make. I didn’t have to know the right people, speak the right way, have the bank of mum and dad on my side. It was a direct line to people who could make my ideas happen. Amid an elitist industry where working class people are underrepresented, and often misappropriated by middle-class careerists, this award was a beacon of hope for me!

Can you tell us a bit about the lead character Alma, is she based on you? What do you admire about her?

Alma certainly shares a lot of my characteristics and life experiences but there are differences too. She is actually more like me when I was younger. Or who I could’ve been if I’d made different choices; stayed with the ex, not moved to Manchester, not been to therapy, etc.

What I like about her is her undiluted enthusiasm and optimism. She hasn’t quite come to that point in life where she doesn’t suffer fools, and there’s something lovely about that. She is incredibly raw, whole-hearted and unapologetically herself. She wants to be loved, wants to be normal, wants to be understood and wants to connect. I think we can all relate to that on some level. I certainly can.

Can you tell us a bit about the vibrant female characters in Alma’s inner circle?

I’m really excited by the female leads in this show! Alma’s Mum and Grandma are not the type of characters you’ll have seen women play on telly often - if ever. I certainly haven’t. They don’t fit into the boxes we often provide for women. Alma’s mum, Lin for instance who is battling a heroin addiction - she is a constant contradiction. She is as rough and dodgy as she is eloquent and creative. She’s funny and smart and her vulnerability is palpable. But she’s also dangerous, selfish and manipulative. You’re not sure how to love her, but you do. Siobhan Finneran plays Lin and just absolutely nails it - she’s an incredible actress with great comic timing and I think this pilot really shows that off. Alma’s Grandma, Joan, is played by Lorraine Ashbourne and Alma’s best friend Leanne is played by Jayde Adams. Both of them play strong unapologetic characters beautifully - with balls, comedy, honesty and nuance. I have absolutely loved seeing my strong female characters brought to life by incredible, strong female actors.

The show is set in Bolton where you are from - how important was it for you that this story took place in the North of England?

Very. It’s my home. It’s what I know! The North (particularly Bolton in my opinion) has its own humour and way of coping - it always has had. We’re naturally funny people. It’s in the DNA. We have a strong sense culture and I’m proud of that. But also, that culture has evolved a lot and I personally haven’t seen any modern, cutting edge comedy in the North since Shameless... and that first aired nearly twenty years ago! I want to remind people that we can tell interesting, important, intelligent stories, whilst being funny and Northern too!

Do you feel there’s a gap for more regional voices in UK comedy?

Yes. And for more regional female voices - definitely yes. It’s about time we saw strong, funny, dark, female-lead stories, outside of London and/or the middle/upper class. I’m not saying those shows don’t have a place too - they do. In fact, Fleabag is one of my favourite sitcoms of all time, but we need variety. We need to represent more people. In my 2017 stand up show, Branded, I talked about how the conversations around feminism feel dominated by the voices of white, middle class women, who set the ideals for all of us based on their own experience and what’s been made possible for them. I want to explore feminist issues without judgement or even final, decisive points. I want to ask questions and tell stories through people like Alma. People like me. People who don’t often get asked their perspective on these issues.

Your stand-up has often been informed by topics personal to you, and your pilot has also drawn from these experiences. What was different about how you wanted to approach these topics for television?

The topics around women, class, mental health, relationships and growing up through the care system are the same - most of the stories shared are too. But because you’re setting up a whole world and a character based on your past experiences that lives now, it immediately becomes fiction. And finding the fiction was what really freed me up when writing the pilot. Also, when you do stand-up about someone you know, you act out them out yourself as you remember them. With a sitcom, actors bring new things to characters that you never imagined and that’s very exciting.

The programme tackles a lot of tough topics from substance abuse to mental health challenges - do you think humour can play a valuable role in helping start discussions on these areas?

Definitely. 'You’ve got to laugh' as my Great Granny Alice always used to say, in a slightly dark way, never quite finishing the sentence. But it’s true. You do. Humour is honest. It allows us to say the boldest, bluntest things without pissing people off. It keeps us sane when life has gone to shit. I think my ability to laugh and be funny has genuinely saved my life at times.

How did it feel seeing your words come to life on set with your co-stars?

Fabulous! I couldn’t ask for a more talented, brilliant and supportive group of actors to work with.

Did you have people in mind for those roles?

Yeah - Leanne. That role was very clearly written for Jayde Adams. I’d seen her years ago doing a comedy performance with opera and just thought she was fantastic! This role taps into all Jayde’s strengths as a comedian, but also shows off her acting chops too. We have a great chemistry together on screen - you can tell we’re friends and we’ve been pissed together!

Did you have any stand-out moments from the filming process?

Yeah. One of my favourite scenes to do was with Lorraine (Lin), Siobhan (Grandma Joan) and Nick (Jim) in the park. Lorraine was just beautiful in that scene. So was Siobhan. It was dead funny and full of heart. And also, in the scene, I’d written in that we all ate pasties from my favourite pasty shop in Bolton so we ate them continually for an hour. Another scene though, me and Jayde had to eat cold kebabs for an hour of filming in the freezing cold and that was not so nice. You wouldn’t know though - we look happy as Larry chomping down on those kebabs. Jayde is fantastic as Alma’s best mate - such a natural actor, great support to me and bloody funny throughout.

What would you say is at the heart of this story?

I think love, resolve and humour. It’s about celebrating women dealing with the hand they were dealt while doggedly pursing their dreams and making people laugh while they do it.

What should audiences expect from Alma’s Not Normal? What makes this programme different?

Considering the topics of the show and the complex characters, it doesn’t take itself too seriously or miss out on laughs. It’s funny and Northern and optimistic. It’s loud, unapologetic and full of heart - just like Alma.
Posted by JD at 15:11