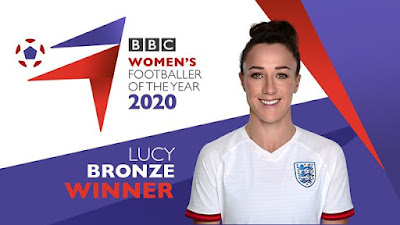 Lucy Bronze, who plays for England and Olympique Lyonnais, has been crowned the BBC Women's Footballer of the Year 2020.

The annual award from the BBC World Service - now in its sixth year - is voted for by football fans from around the world.  It is the second time that Bronze has won the award, having also scooped the prize in 2018.

In previous years, winners have found out they’ve won when the BBC’s Sarah Mulkerrins visits them in person to surprise them in front of the cameras. But this proved more difficult this year as a result of the Coronavirus outbreak, and Bronze instead found out she was the winner in a surprise video interview set up over the internet. With Olympique Lyonnais’ matches postponed, their training centre temporarily closed, and players told to self-isolate, Bronze has returned home to England, and says she is trying to keep fit at home.

On finding out she had won, the 28 year-old defender said: “I'm definitely surprised - I wasn't expecting it. It's pretty special (being a public vote) and quite amazing. All the girls that have been nominated are global superstars. I look at the list now and think everyone knows who these girls are so that's pretty special.”

On self-isolation, she said: “The players have been given some time off and all been told to stay in our homes and that’s what I’m doing the majority of the time. I’m now home in England, I’ve got my dog here and I’ve two girls who live with me in my house so we’re doing things to keep fit. I have been sent a fitness programme from the club. I’ve got some gym equipment, astroturf in the back garden so not completely away from football.”

When asked about her highlight of the last year Bronze said: “Winning the Champions League for a successive year. I was pleased with my performance and we put on a real good show for women's football. The World Cup hit me hard (losing in the semi-finals with England) but it's motivated me to do more.

“I'm really proud in my career the fact there was a time I had to pay to train on a pitch twice a week to now the heights of being paid to play in another country, winning the Champions League, playing at Wembley. To see where women's football is now, I would never have dreamt about it when I was first getting in to football when I was 12 years old. It's part of the reason I don't want my career to end with the buzz that's around women's football.”

On winning the award for a second time she added: “Winning the first time was a surprise - and it is now - but to win a trophy twice is really special as it's so much harder, to stay at the top level is so difficult, it's not something that's easy and I don't take it for granted one bit.”

Bronze emerged as the winner from a five player shortlist of the top names in women's football. Vivianne Miedema came in second, Megan Rapinoe came in third place in the public vote. Julie Ertz and Sam Kerr were also nominated.

Bronze’s achievements last year include winning the domestic double and the Champions League with her team Olympique Lyonnais, being the first English player to win the UEFA Women’s Player of the Year award, and runner-up in the World Cup Golden Ball and Ballon d’Or. She helped England win the She Believes Cup before guiding her country to the semi-finals of the World Cup in France, losing to eventual winners USA.

Before moving to France to play for Olympique Lyonnais, she won the FA’s Women’s Super League three times - twice while playing with Liverpool and once with Manchester City. Before starting her senior career, she played college football for the North Carolina Tar Heels in the USA.
Posted by JD at 17:42