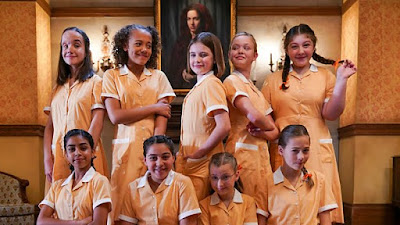 Malory Towers is a new 13-part drama based on the iconic novels by Enid Blyton and following the adventures of Darrell Rivers as she leaves home for the first time to attend an all-girls’ boarding school.
The series is set in post-war Britain on the sun-drenched cliffs of the Cornish coast and explores a nostalgic world of midnight feasts, lacrosse, pranks, a mystery ghost and lasting friendships.

Both aspirational and inspirational, the show has also been given a contemporary twist telling the story of universal experiences such as shifting cliques, FOMO, bullying, crushes, peer pressure, and self-doubt. The girls keep an eye on each other and, like a family, are forever connected by their shared experiences.

The series opens with 12 year-old Darrell Rivers settling into her first day at Malory Towers. She is always in the thick of things and her hot temper causes her lots of problems. But she is also a responsible, hard-working girl and very popular, much to the annoyance of Gwen, who is also new to the school and jealous of Darrell’s popularity and friendships.

In awe of Malory Towers, Darrell keeps her past at her old school, St. Hilda’s, a closely guarded secret but with Gwen on the case will it come back to haunt her?

Malory Towers has exploits and excitement around every corner and Darrell’s dreams of adventure and independence are soon realised with the school surpassing all her expectations. However, Darrell quickly finds the expectations she has of herself are far harder to live up to.

The first episode airs on CBBC at 5.30pm on 6 April when the full series also lands on BBC iPlayer. The series has been made for CBBC by King Bert Productions and WildBrain in association with Family Channel. It has been adapted for television by Rachel Flowerday and Sasha Hails.
Posted by JD at 18:46