New arrival for BBC One - Life And Birth 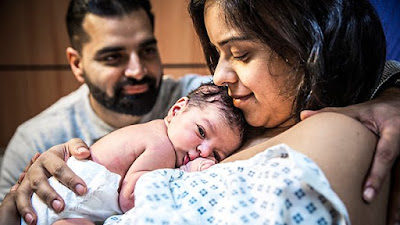 BBC One and Dragonfly Film and Television Productions Ltd (part of Endemol Shine UK) have announced their new addition Life And Birth is due this Spring.

The six-part series reveals what it really takes to deliver Britain’s next generation, through the eyes of parents and staff at three of Birmingham’s busiest maternity hospitals.

With unprecedented access across two NHS trusts, from the antenatal clinics and nationally renowned Fetal Medicine Centres, to the delivery suites, emergency operating theatres and Birmingham Children’s Hospital, the series gives an extraordinary and privileged insight into the places where cutting-edge medicine meets the miracle of birth every single day.

Narrated by Suranne Jones and produced by Dragonfly - the makers of the BAFTA award-winning BBC ONE series Ambulance - Life And Birth goes beyond the stories of the labour ward and meets the people who help the safe and healthy delivery of babies, showing maternity care in a way that it has not been seen before.

From intricate lifesaving surgical procedures on babies in the womb, to specialist care for women who have had multiple miscarriages, to births which go as planned, this programme captures the incredible work of midwifes, NHS doctors and surgeons, who are dedicated to supporting families as they bring new life into the world.

Multiple camera crews stationed across the three units captured in compelling and candid detail, stories of birth in all their richness and complexity as they simultaneously unfolded - including some the most challenging and complex cases clinicians faced.

To bring the viewer the most intimate insight, Life And Birth combines prime lens documentary filming techniques with fixed rig cameras which means no moment is missed along with graphics of the social media and text messages shared between loved ones at the most emotional moments of their lives.

The series features a range of birth stories, from early scans and pre-term complications in the antenatal clinics to those starting to push on the delivery suite; from emergency caesarean sections in theatre to families in intensive care and in the post-natal ward getting to know their newborns before they head home.

In the first episode, 22-year-old mother of one Ashleigh goes into labour supported by childhood sweetheart Luke. She comments, “A lot of people do try to make out like pregnancy is full of rainbows and magic. It’s not this big bubble of glitter that everybody makes out. But you are over the moon and happy when you are handed that baby at the end. That’s the part that makes everything worth it.” Due to transmit on BBC One this spring, Life And Birth captures the magical journey to parenthood with tear-jerking drama.
Posted by JD at 14:44

Email ThisBlogThis!Share to TwitterShare to FacebookShare to Pinterest
Labels: Life And Birth