Pilgrimage: The Trip to Istanbul Coming to BBC Two on Friday 27 March 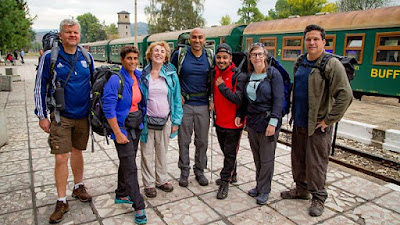 Hot on the heels of the first two critically acclaimed series which saw well known personalities embark on a journey of discovery, firstly to Santiago and then to Rome, Pilgrimage is back!

Now a modern-day path of peace, Pilgrimage: The Road To Istanbul follows a largely untrodden route which was formed just over ten years ago and aims to promote tolerance for all faiths and cultures. Starting in Serbia’s capital city Belgrade, the pilgrims will travel through Bulgaria and the mountainous Balkans, before crossing the border into Turkey, with their goal of reaching Istanbul and the magnificent Suleymaniye Mosque.

With just over two weeks to complete their pilgrimage, it will be a once in a lifetime experience for our pilgrims. They’ll visit historical monuments and buildings and see first-hand how religions have clashed over the centuries, from the Ottomans right up to more recent, 20th century conflicts. But how will the pilgrims cope with the physical challenge and will this journey change how they feel about themselves and their beliefs?
Posted by JD at 12:57

Email ThisBlogThis!Share to TwitterShare to FacebookShare to Pinterest
Labels: Pilgrimage