All-star cast heads to The Real Marigold Hotel, starting 30 April on BBC One 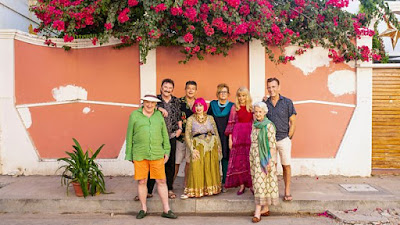 Hit BBC One series, The Real Marigold Hotel, produced by Twofour, returns to BBC One with an all star line up.

Six thousand miles away from home and in the colourful coastal city of Puducherry and in Rishikesh in the foothills of the Himalayas, the group have time to reflect on the ups and downs of life, open up to each other and find out if they could spend their golden years there.

Clare Sillery, Head of Commissioning, Documentaries, History and Religion, says: “I’m delighted to announce a new series of this hugely successful BBC One series. Our cast of famous senior citizens bring a wonderful blend of warmth and wit and wisdom to this latest adventure in Puducherry, India that is simply a joy to watch.”

David Clews, Twofour’s Creative Director and Executive Producer for The Real Marigold Hotel brand, says: “Every series it’s a joy to see the finest group of celebrities come together on an unforgettable adventure and this series doesn’t disappoint. Household names combined with royalty from the creative industries all promise to see hearts open and some unlikely friendships blossom. Our cast members deliver a journey of reflection and warmth, with laugh out loud adventures and life changing results.”

The brand has gone from strength to strength with four series and three spin-offs - with the last series kicking off with an average of 4.8 million viewers, 87% up on slot average and taking a 23% audience share.
Posted by JD at 18:29

Email ThisBlogThis!Share to TwitterShare to FacebookShare to Pinterest
Labels: The Real Marigold Hotel