BBC announces plans for a Springwatch like no other series 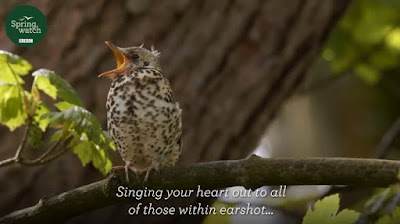 Springwatch will return to BBC Two this May, with a special series of live programmes which aim to keep the UK connected to native wildlife offering real comfort viewing, at a time of heightened uncertainty for the country.

Due to the Coronavirus crisis the BBC has found an innovative new way to ensure the series will continue to broadcast live for three weeks on BBC Two. With the presenters no longer able to gather together in the Springwatch hub, they will be staying on home-turf and broadcasting live from their local areas, across the country.

This special series of Springwatch, will document a spring like no other, as the native wildlife of the UK adjusts to life in both towns and in the country without the presence of people. The stories of this spring will be presented by Chris Packham, live from his New Forest patch, Gillian Burke live from a Cornish base and Iolo Williams, from his home in mid-Wales.

This year Michaela Strachan, who is locked down in South Africa, will be unable to join the team in person. However, she will send a message of support to the viewers and the series will revisit some of her favourite Springwatch highlights from past years.

Across the three-week run, the team will be joined by special guests presenters.

The series will celebrate both the wildlife and the science stories that showcase the diversity of UK habitats and species and will feature a number of pre-recorded wildlife films, captured just prior to the Government restrictions on movement, as well as more recent content shot in accordance with the official guidance on self-distancing.

Chris Packham says: “This Springwatch will be a series like no other. As the country experiences lockdown the natural world offers solace to so many. I’m delighted that through the magic of modern technology, the Springwatch team will be able to share the splendour of spring with the nation again this year. And broadcasting live from the New Forest, I’m looking forward to showing viewers some of the best British wildlife from my neck of the woods.”

Gillian Burke says: “This is certainly a unique spring and one that has presented the whole nation with some really tough challenges. With so many of us stuck indoors, Springwatch will bring the bright energy and colour of a season that is the very symbol of hope and resilience itself. I can’t wait to share this spring with everyone!”

Iolo Williams says: I’m delighted that Springwatch is going ahead next month. With everyone in lockdown, the natural world has provided a soothing escape for so many people. It will be a pleasure to re-join the ‘Watches team and bring the best of British wildlife into the nation’s living rooms.”

Email ThisBlogThis!Share to TwitterShare to FacebookShare to Pinterest
Labels: Springwatch