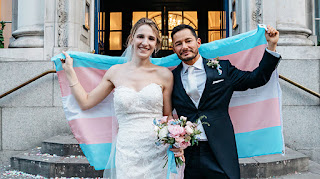 Channel 4 has commissioned a 1x60 film which follows the journey of Jake and Hannah Graf as they become Britain’s most prominent transgender parents. Jake and Hannah announced the birth of their baby, Millie, on April 16th 2020, but their path to parenthood has had some unique challenges along the way.

Made by Parable and filmed over a year by director Gussy Sakula-Barry, the documentary follows the pair as they strive to turn their dream of starting a family into a reality, using Jake's embryos that he had frozen. As they embark on their unique experience, the couple face up to various ideas of what it means to be a parent in modern Britain and explore the options for surrogacy open to British people in the UK and abroad. With their Belfast-based surrogate's due date rapidly approaching and the country in lockdown, they have to race to Northern Ireland to make it in time for the birth.

Jake and Hannah married in 2018. Jake is a writer, filmmaker and actor known for his roles in The Danish Girl and Colette. Hannah was one the highest-ranking transgender officers in the British Army and has an MBE for her work with LGBT army personnel.

Jake and Hannah Graf said: “When we began the nail biting journey to parenthood, we could never have imagined the rollercoaster ride that would follow and the additional pressures and challenges that came with having our baby during a global pandemic. From finding our surrogate through lockdowns, C sections and struggling to register our baby, there has never been a dull moment, and this film will one day be the most incredible memento for the star of the show, our beautiful daughter Millie.”
Posted by JD at 13:54

Email ThisBlogThis!Share to TwitterShare to FacebookShare to Pinterest
Labels: 100 Ways to Make a Baby